The Heidelberg scientists Dr. Anton Meinhart and Prof. Michael Platten will receive the Chica and Heinz Schaller Research Award for their pioneering work in biomedical basic research. The C.H.S. Foundation is honouring two recipients for the year 2011; each award is endowed with funding in the amount of €100,000. Dr. Meinhart leads a junior research group at the Max Planck Institute for Medical Research (Heidelberg) and is a member of the Cluster of Excellence CellNetworks of Heidelberg University. His award pays tribute to his innovative research on the role of programmed cell death in bacteria. Prof. Platten, who works at Heidelberg University Hospital and the German Cancer Research Center (DKFZ), is being honoured for his ground-breaking studies on the significance of tryptophan metabolism for the growth of malignant brain tumours. The award ceremony will take place on 6 February 2012. 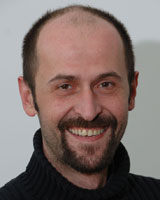 Anton Meinhart (born 1974) studied at the University of Vienna and the University of Cologne. He received his PhD in biochemistry after a three-year research residency at Freie Universität Berlin in 2001. After a postdoctoral period at the Gene Center in Munich, Dr. Meinhart came to the Max Planck Institute for Medical Research in Heidelberg in 2004 where he heads a junior research group in the Department of Biomolecular Mechanisms.

Dr. Meinhart’s research interest lies in the significance of the programmed cell death of bacteria for the virulence of pathogenic microorganisms and its role when antibiotic resistance is gained. This cell death is controlled by bacterial toxin-antitoxin systems. As the scientist himself explains, spontaneously released toxin poisons the bacterium from the inside if the latter is no longer producing a specific toxin-neutralizing antitoxin. Dr. Meinhart’s working group is engaged in the investigation of this poisoning mechanism in various pathogens. The team has shown that a wide-spread toxin-antitoxin system in pathogenic microorganisms directly intervenes in the synthesis of the bacterial cell wall and converts its central component – UDP-N-acetylglucosamine – into a previously unknown, universal poison for bacteria. This research opens up new possibilities in the study of the significance of toxin-antitoxin systems for programmed “bacterial suicide” and its function in groups of bacteria. In addition, the research offers new foundations for the development of innovative antibiotics. 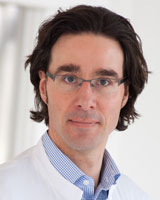 Michael Platten (born 1971) studied medicine at the University of Bonn with residencies at the Harvard Medical School in Boston (USA) and the Royal London Hospital (England); in 1998 he received his PhD in Bonn. He then went to the University of Tübingen to complete his specialty in neurology and his habilitation in 2006. Since 2007 the scientist has led a Helmholtz junior research group at the German Cancer Research Center in the area of experimental neuroimmunology. In 2010 he was appointed an initial professorship at the Medical Faculty of Heidelberg of Heidelberg University. He is senior consultant in the Department of Neurooncology at Heidelberg University Hospital.

The working group of Prof. Platten has discovered a new metabolic pathway that affects the aggressiveness of malignant brain tumours – so-called gliomas. Prof. Platten’s team has shown that a specific degradation product of the amino acid tryptophan, as well as an enzyme that is responsible for the formation of the product, are found to a greater extent in cells of especially aggressive gliomas. By means of so-called dioxin receptors, this metabolite triggers cellular signal chains that promote the growth of tumours and weaken the patient’s immune system. According to Prof. Platten, there are indications that the tryptophan metabolic pathway is also significant for other types of cancer. His work defines a new point of attack in the fight against gliomas that are difficult to treat and serves as a basis for the development of innovative cancer drugs.

The C.H.S. Foundation was established in 2000 by scientists Chica and Heinz Schaller to promote biomedical basic research at Heidelberg University by financing innovative research projects. Its flexible funding awards especially support junior researchers in carrying out independent projects. The research award, given annually since 2005, is an essential tool to this end. The 2011 Chica and Heinz Schaller Research Awards will be conferred at a public ceremony on 6 February. It will take place at the Center for Molecular Biology, Im Neuenheimer Feld 282, seminar room 001 and will begin at 4pm. All those interested are welcome to attend; the prize winners will present their work in English.

Digital photos of the two prize winners can be obtained from the Press Office.