An Eye on Stem Cells 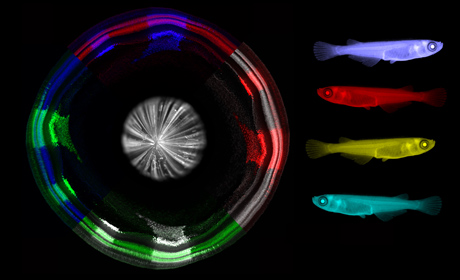 By means of single cell transplantation from four different transgenic fish lines (on the right) the scientists generated a retina with several different Arched Continuous Stripes (ArCoS). The concentric layers for each coloured stripe represent all different cell types of the retina. For orientation: The fish eye is viewed from a lateral position and the round white structure in the middle is the lens.

A single stem cell has the potential to generate offspring that differentiates into a variety of specialised cell types. This has now been shown by a team of Heidelberg biologists in the adult retina of the medaka fish as a model system. By applying permanent genetic cell labelling to the retinal stem cells, the scientists Prof. Dr. Joachim Wittbrodt and Dr. Lázaro Centanin from the Heidelberg University's Centre for Organismal Studies could show that a single retinal stem cell is multi-potent and can develop into all retinal cell types. These results have been published in the journal „Cell Stem Cell“.

Stem cells help the body to grow or regenerate damaged cells or tissues. This universal response to various problems in the adult organism, even in the brain, is currently in the focus of research all over the world. One key question has so far remained unanswered: Is the “SWAT team” of stem cells a team of specialists or is it composed of individual universalists? In other words: does every cell type to be repaired require a special type of stem cells or can any single stem cell divide and generate offspring that fixes all problems in its respective environment?

To address this key question, the Heidelberg scientists combined a permanent genetic cell labelling technique with single cell transplantations in medaka fish as a model organism. Thus, the research group headed by Prof. Wittbrodt could label single stem cells in the medaka retina and all of their descendants in a complete lineage tree. This allowed them to study the behaviour of single stem cells in their “natural” environment, namely the growing fish retina. The results obtained in this study demonstrate that retinal stem cells are multi-potent and a single stem cell can develop into all retinal cell types.

Experimentally this is highlighted by the formation of so-called Arched Continuous Stripes (ArCoS), labelled stripes that go through the entire retina and contain all retinal cell types. All these ArCoS originate in a single retinal stem cell. “Interestingly, different cell types within an ArCoS are more closely related than neighbouring cells of one cell type”, says Lázaro Centanin, postdoctoral researcher in the Wittbrodt group.

The results indicate that the growth of the retina is regulated by controlling stem cell proliferation, while the differentiation into specific cell types proceeds as an intrinsic programme. “It‘s as if a house was built by a universal craftsman who does it all, laying bricks, plastering, plumbing and roofing all simultaneously because the craftsman it is able to split himself up“, says Joachim Wittbrodt, director of Heidelberg University's Centre for Organismal Studies and at the same time head of the Institute of Toxicology and Genetics at Karlsruhe Institute of Technology (KIT).

In addition, the scientists could show that in the same organ – the fish eye – a second class of stem cells exists besides the multi-potent retinal stem cells: the stem cells of the pigmented epithelium. According to Prof. Wittbrodt, the growth rates of both stem cell populations are closely correlated. The retinal pigment stem cells, however, have a limited potential and are merely unipotent.

Apart from its relevance for basic research in retinal growth and regeneration, the methods developed and applied in this study have great potential for future research. The genetic labelling of single stem cells and all their descendants in the medaka eye, which grows in a tightly controlled temporal and spatial sequence throughout its entire life, will allow insights into the behaviour and the key developmental processes of single stem cells and their descendants in the intact living organ. This will also allow Prof. Wittbrodt's research group to further study the relevant regulatory mechanisms in individual cells in the context of the entire organism.

For more information, go to www.cos.uni-heidelberg.de/index.php/j.wittbrodt?l=_e

Note for news desks:
Digital pictures are available from the press office.