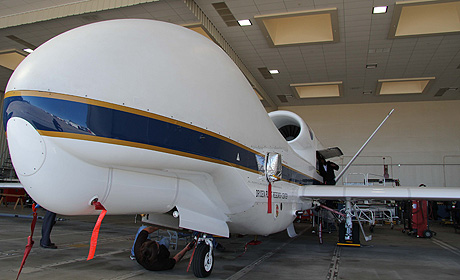 Physicists at Heidelberg University will be contributing an innovative optical spectrometer to the first-ever climatic and atmospheric research project to make use of an unmanned drone. The aircraft in question, the NASA’s “Global Hawk”, will be employed in the American and German-assisted research project Airborne Tropical TRopopause Experiment (NASA-ATTREX) for measurement flights in the tropical tropopause layer (TTL). The TTL is difficult to reach, so it has rarely been the object of experimental investigation. However, it is of major significance for the chemical composition and development of the ozone layer. Its radiative budget is also extremely important for the Earth’s climate. Together with Prof. Dr. Jochen Stutz at the University of California in Los Angeles, Prof. Dr. Klaus Pfeilsticker’s research group at Heidelberg’s Institute of Environmental Physics provides a novel optical spectrometer to the project.

High-flying unmanned aircraft like the “Global Hawk” provide new access to the TTL layer, which is located 14 to 18 kilometres up from the surface of the Earth. “During the research flights for NASA-ATTREX, our optical spectrometer will be measuring some of the key atmospheric radicals important for ozone chemistry,” says Prof. Pfeilsticker. “We also want to investigate the optical properties and the occurrence of airborne particles, so-called aerosols, and cloud particles in the TTL.” Other instruments contributed by US research groups will be measuring other atmospheric gaseous constituents as well as the volume and chemical composition of the aerosols and cloud particles, and the climate-related radiation budget. The findings from these missions are designed to improve global weather and climate models.

In late October, an initial, almost 24-hour test flight set off for the tropical east Pacific from Edwards Air Force Base (EAFB) in California. “This test flight was extremely successful,” says Prof. Pfeilsticker, “so in November  two more test flights were performed from EAFB aiming at an investigation of the upper troposphere south of Hawaii.” The research flights in total will last 600 hours and will take place in 2013 and 2014. “A series of missions will start from EAFB and later from the island of Guam and Darwin in Australia during the respective rainy season,” says Prof. Pfeilsticker. “This will enable us to investigate the TTL over the warm western Pacific in greater detail. There the high oceanic water temperatures and air moisture produce high-ranging thunderclouds and major low-pressure areas that have a considerable direct and indirect impact on the Earth’s climate and the ozone layer.”

The NASA-ATTREX project will receive funding of US$ 30 million from the US government until end 2015. The Heidelberg researchers have put in an application to the German Research Council (DFG) for their contribution to the project.