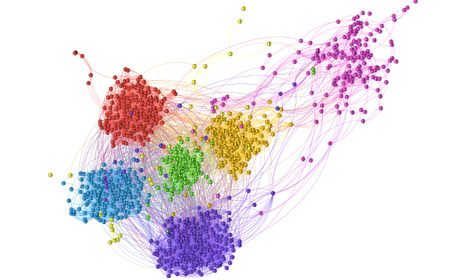 The illustration depicts a word network in which the players attempt to find the solution. Two words are linked to one another if they differ by one letter only. For example, all the words in the blue network have an “a” in the middle. This kind of network provides many paths from the start to the end point, but the participants all look for anchor points to navigate by.

In order to be able to move about on unfamiliar terrain, humans use individual “anchor points” to orient themselves after a short time without having to explore the entire terrain. This is also true for abstract environments – even in the mental world of a word game, as demonstrated by a group of young computer scientists at Heidelberg University. To test their theory on human orientation behaviour, the scientists used a computer-based word game and analysed the participant’s progress using network analysis software. Dr. Katharina Zweig from the Interdisciplinary Center for Scientific Computing (IWR) at Heidelberg University worked together with scientists from Bangalore (India) on the study.

“At the beginning of the 1990s, a study reported that nurses, even after two years, would use the same pathway to get from point A to point B in a five-storey hospital, even though they knew shorter ways”, explained Dr. Zweig, who heads a junior research group at the IWR. Together with Sudarshan Iyengar, a visiting scientist from the Indian Institute of Science in Bangalore, Dr. Zweig analysed how the word games were solved to provide insight into why humans always select the same pathways and how they define those pathways. The researchers interpret the game as a simulation of an environment in which all the players can move only according to specific rules, making their behaviour amenable to analysis.

To begin, all three-letter words were extracted from the Oxford Dictionary and used to generate a computer game. From the nearly 1,000 words, players were given a start word and an end word. Their task was to find a sequence from one word to the other where each successor word differed from its predecessor by only one letter. In their observations, Dr. Zweig and her team noted that after about 15 rounds, players could get from the start to the end word much more quickly than at the beginning of the game. Dr. Zweig explained that participants found the initial rounds extremely difficult because they were using a less effective strategy. They attempted to put one of the letters from the end word into the new word in order to get to the solution. However they reached their target much more quickly when they repeatedly used specific words to navigate around the game.

The rounds were recorded by the computer and analysed by Katharina Zweig and Sudarshan Iyengar with the help of special network analysis software. The words the participants formed were recorded and represented as nodes in a network of possible words. This gave the researchers a “cloud” of nodes, which proved characteristic for each test person. “After a difficult start, players began to repeatedly use their favourite words to navigate to the solution. We identified and analysed these words as nodes in the word network. In so doing, we noticed that the nodes were not necessarily the shortest pathway to the end word, but players still got there much more quickly,” explained Sudarshan Iyengar.

The scientists believe that these anchor points of favourite words are located at the centre of the word network – and not just in the network of the game’s given round, but in the entire network of all the words from the dictionary, as shown by the computer analysis. “If we’re moving around unfamiliar terrain, we create individual anchor points that we return to again and again in order familiarise ourselves with the environment as quickly as possible. The anchor points therefore help us to understand a portion of the larger network and find a solution without having to roam through the entire network”, says Dr. Zweig.

For its publication entitled “A Network Analysis Approach to Understand the Human Way-finding Problem” the Cognitive Science Society recognised Dr. Zweig’s team with an award at this year’s “CogSci 2011” conference for the cognitive sciences at the end of July. For more information, go to www.ninasnet.de and www.netz-werker.blogspot.com.

Note to newsdesks:
Digital pictures available from the press office.