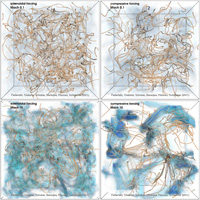 Strong magnetic fields in the Universe apparently date back to the period shortly after the Big Bang. This was recently demonstrated with the aid of three-dimensional computer simulations by an international team of researchers headed by Heidelberg astrophysicist Dr. Christoph Federrath at the Ecole Normale Supérieure in Lyon (France) and the universities of Heidelberg, Hamburg and Göttingen. Their simulations show that magnetic fields are amplified by turbulent flows even under extreme physical conditions, suggesting that such fields may well have been created at an early stage in the formation of the Universe. The findings will be published in “Physical Review Letters” on 9 September 2011.

Both the gas between the stars of a galaxy and the matter between galaxies are magnetised. However, little is known so far about how these magnetic fields, which are observable by telescopes, actually came into existence. Now, the international research team has proposed an answer: the underlying mechanism is the amplification of initially weak magnetic fields by turbulent flows such as found in the interior of the Earth and the Sun. Previous studies have demonstrated that such turbulent flows even existed in the early Universe. “This turbulence makes magnetic fields grow exponentially”, says Dr. Federrath. “As our computer-based models have shown, such growth is possible even under the most unfavourable physical conditions, for example immediately after the Big Bang, when the first stars in the Universe were forming.”

In their work, the astrophysicists use three-dimensional computer simulations performed on more than 32,000 processors in parallel. They demonstrate how magnetic field lines are stretched, twisted and folded by turbulent flows. The energy required for these processes is extracted from the turbulence and converted into magnetic energy. Much as electricity generates a magnetic field through the motion of charge carriers, charges themselves are subject to a force when they move in a magnetic field. “The interaction between turbulent energy and magnetic field can amplify an initially weak magnetic field until it is so strong that it changes the dynamics of the turbulent flow that originally created it”, says Dr. Federrath, who works at Heidelberg University’s Institute of Theoretical Astrophysics. “This physical process resembles the generation of electromagnetic energy in a bicycle dynamo, which is why it is also referred to as ‘turbulent dynamo’.”

The scientists hope to learn more about the dynamic impact of magnetic fields and their role in the formation of the first stars and galaxies. „In particular, the presence of strong magnetic fields might be responsible for ejections of matter, so-called jets, from the first stars in the Universe“, Dr. Federrath explains. Other researchers in the project besides Dr. Christoph Federrath include Prof. Dr. Gilles Chabrier (Lyon), Jennifer Schober (Heidelberg), Prof. Dr. Robi Banerjee (Hamburg), Prof. Dr. Ralf S. Klessen (Heidelberg) and Prof. Dr. Dominik R. G. Schleicher (Göttingen).

For more information, go to www.ita.uni-heidelberg.de/~chfeder/pubs/dynamo-prl/dynamo_prl.shtml

Note for news desks
Digital picture material is available from the Press Office.