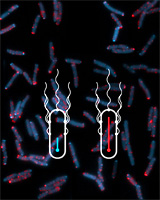 The picture shows Escherichia coli bacteria in which complexes of chemotactic proteins (blue) and flagellar motors (red) are marked with fluorescent proteins. The overlain drawing illustrates that chemotactic swimming of E. coli is independent of temperature.

Temperature fluctuations have an adverse effect on most living organisms. Mammals and birds have intricate systems to keep their body temperatures constant. Though primitive coliform bacteria do not possess such systems, they still manage to offset these fluctuations. Scientists at Heidelberg University’s Centre for Molecular Biology have found out how this “bacterial thermostat” works by investigating a model organism, the intestinal bacterium Escherichia coli. The results of the research team, headed by Prof. Dr. Victor Sourjik, were published in Cell on 15 April 2011.

Most living organisms are regularly exposed to temperature fluctuations, e.g. temperature changes in the course of the day or in large-scale cycles like the seasons. These fluctuations affect all chemical reactions in the relevant organisms and can easily trigger anomalies in behaviour, metabolism or development. Accordingly, biological organisms have developed mechanisms to compensate for external temperature variations. Mammals and birds keep their body temperatures constant via intricate systems that require high energy consumption. However, more primitive organisms do not possess such complex temperature regulators, so how do they deal with the problem? Using the chemotactic behaviour of Escherichia coli as a model, the Heidelberg scientists demonstrate how temperature compensation can function in bacteria.

Chemotaxis is the movement of a microorganism or cell towards high levels of a chemical stimulus. As with higher organisms, chemotaxis directs bacteria to sources of food in their immediate environment. The strategy involved is relatively complex: over time the bacteria compare the concentration of chemical substances along their path and change direction accordingly. Temperature affects both the speed at which the bacteria swim and all chemical reaction rates in the chemotaxis-protein network underlying this decision-making strategy. The Heidelberg study indicates that in sum the frequently extreme temperature effects on individual parameters equal out exactly, so that ultimately the chemotaxis network is almost perfectly temperature-compensated.

“Especially interesting was the discovery that bacteria can adjust their behaviour to their respective growth temperature,” says Professor Sourjik. “This means that chemotaxis works best at the temperature at which the bacteria are growing.” The Heidelberg scientist emphasises that the biological principles operative in primitive organisms can be found in a similar form in higher organisms too. “We assume that very similar regulatory mechanisms also exist in multi-cell organisms,” he says.

For more information, go to www.zmbh.uni-heidelberg.de/sourjik/default.shtml

Note for news desks
Digital picture material is available from the Press Office (see below).