Atom and its Quantum Mirror Image 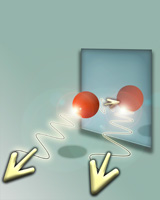 Towards the mirror or away from the mirror? Physicists create atoms in quantum superposition states.

Standing in front of a mirror, we can easily tell apart ourselves from our mirror image. The mirror does not affect our motion in any way. For quantum particles, this is much more complicated. In a spectacular experiment in the labs of the Heidelberg University, a group of physicists from Heidelberg Unversity, together with colleagues at TU Munich and TU Vienna extended a gedankenexperiment by Einstein and managed to blur the distinction between a particle and its mirror image. The results of this experiment have now been published in the journal “Nature Physics”.

When an atom emits light (i.e. a photon) into a particular direction, it recoils in the opposite direction. If the photon is measured, the motion of the atom is known too. The scientists placed atoms very closely to a mirror. In this case, there are two possible paths for any photon travelling to the observer:  it could have been emitted directly into the direction of the observer, or it could have travelled into the opposite direction and then been reflected in the mirror. If there is no way of distinguishing between these two scenarios, the motion of the atom is not determined, the atom moves in a superposition of both paths.

“If the distance between the atom and the mirror is very small, it is physically impossible to distinguish between these two paths,” Jiri Tomkovic,  PhD student at Heidelberg explains. The particle and its mirror image cannot be clearly separated any more. The atom moves towards the mirror and away from the mirror at the same time. This may sound paradoxical and it is certainly impossible in classical phyiscs for macroscopic objects, but in quantum physics, such superpositions are a well-known phenomenon. “This uncertainty about the state of the atom does not mean that the measurement lacks precision”, Jörg Schmiedmayer (TU Vienna) emphasizes. “It is a fundamental property of quantum physics: The particle is in both of the two possible states simultaneousely, it is in a superposition.” In the experiment the two motional states of the atom – one moving towards the mirror and the other moving away from the mirror – are then combined using Bragg diffraction from a grating made of laser light. Observing interference it can be directly shown that the atom has indeed been traveling both paths at once.

This is reminiscent of the famous double-slit experiment, in which a particle hits a plate with two slits and passes through both slits simultaneously, due to its wave-like quantum mechanical properties. Einstein already discussed that this can only be possible if there is no way to determine which path the particle actually chose, not even precise measurements of any tiny recoil of the double slit plate itself. As soon as there even a theoretically possible way of determining the path of the particle, the quantum superposition breaks down. “In our case, the photons play a role similar to the double slit”, Markus Oberthaler (Heidelberg University) explains. “If the light can, in principle, tell us about the motion of the atom, then the motion is unambiguously determined. Only when it is fundamentally undecidable, the atom can be in a superposition state, combining both possibilities.” And this fundamental undecidability is guaranteed by the mirror which takes up the photon momentum.

Probing under which conditions such quantum-superpositions can be created has become very important in quantum physics. Jörg Schmiedmayer and Markus Obertaler came up with the idea for this experiment already a few years ago. “The fascinating thing about this experiment”, the scientists say, “is the possibility of creating a quantum superposition state, using only a mirror, without any external fields.” In a very simple and natural way the distinction between the particle and its mirror image becomes blurred, without complicated operations carried out by the experimenter.