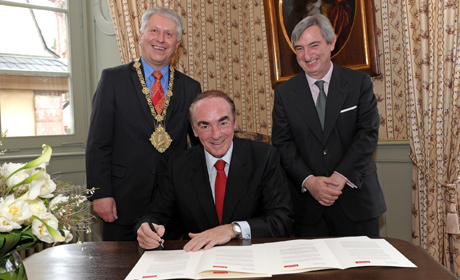 Heidelberg University and Spanish bank Banco Santander signed today (18 March 2011) a framework agreement establishing a future collaborative venture. This venture will establish a new Spain and Latin America Centre at the university initiating and coordinating research and teaching projects related to Spanish-speaking countries, particularly in the humanities and in cultural studies. Over an initial five-year period, this project will be funded by Banco Santander via its División Global Santander Universidades, whose activities form the backbone of the bank’s social engagement and support partnerships with academic institutions in America, Asia and Europe. Heidelberg University is the first German university that will join the circle of the so-called “Santander Universidades”.

The Spain and Latin America Centre’s (SLZ) work will focus on four different sectors. Alongside the encouragement of academic exchange ventures, the SLZ will also establish cooperations with academic institutions in Spain and Latin America with a view to tackling interdisciplinary research issues collaboratively. The emphasis will be on linguistics and literary studies, with special attention paid to linguistic, socio-economic and cultural aspects of language. On the teaching side, the emphasis will be on the realisation of joint international ventures in post­graduate and continuing education. The SLZ also plans to organise cultural events.

The establishment of the SLZ is largely due to the initiative of Heidelberg scholar Prof. Dr. Óscar Loureda of the University’s Department of Translation and Interpreting (SUED). The new centre will be affiliated with the Faculty of Modern Languages and work closely not only with the SUED but also with the Department of Romance Languages and the Institute for German as a Foreign Language. An important cooperative partner, supported by Heidelberg University, is the Heidelberg Center for Latin America in Santiago de Chile. Traditionally international in scope, Heidelberg University is notable for its research prowess and is involved in a worldwide network of cooperative ventures devoted to research and teaching.

Note for news desks:
Digital photo material is available from the Press Office.