First Stars in Universe Were Not Alone

View down onto the accretion disk that surrounds the newly born central star. Clearly visible are spiral arms of enhanced gas density which fragment to build up secondary stars. Blue colors indicate low density, red colors show regions of high density. The scale bar indicates a length of 30 Astronomical Units, where 1 Astronomical Unit corresponds to the distance between the Earth and the Sun.

The first stars in the universe were not as solitary as previously thought. In fact, they could have formed alongside numerous companions when the gas disks that surrounded them broke up during formation, giving birth to sibling stars in the fragments. These are the findings of studies performed with the aid of computer simulations by researchers at Heidelberg University’s Centre for Astronomy together with colleagues at the Max Planck Institute for Astrophysics in Garching and the University of Texas at Austin (USA). The group’s findings, being published in “Science” magazine, cast an entirely new light on the formation of the first stars after the Big Bang.

Stars evolve from cosmic gas clouds in a fierce and complex battle between gravity and internal gas pressure. The density of the gas increases due to its own gravitational pull. This causes the gas to heat up, as a consequence the pressure rises, and the compression process comes to a halt. If the gas manages to get rid of the thermal energy, compression can continue and a new star is born. This cooling process works especially well if the gas contains chemical elements like carbon or oxygen. Stars forming in this way are normally low in mass, like our Sun. But in the early universe these elements had yet to emerge, so the primordial cosmic gas could not cool down very well. Accordingly, most theoretical models predict the masses of primordial stars to be about a hundred times greater than that of the Sun.

Heidelberg astrophysicist Dr. Paul Clark and his colleagues investigated these processes with the help of  very high resolution computer simulations. Their findings indicate that this simple picture needs to be revised and that the early universe was not only populated by huge, solitary stars. The reason is the underlying physics of the so called accretion disks accompanying the birth of the very first stars. The gas from which a new star forms rotates, and so the gas is unable to fall directly onto the star, but first builds up a disk-like structure. Only as a result of internal friction can the gas continue to flow onto the star. If more mass falls onto this disk than it can transport inwards, it becomes unstable and breaks into several fragments. So instead of forming just one star at the centre, a group of several stars is formed. The distances between some of the stars can be as small as that between the Earth and the Sun. 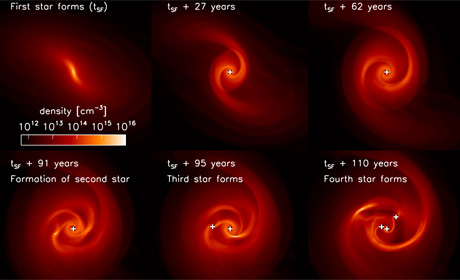 Time evolution of the accretion disk that surrounds the nascent central star. The disk becomes gravitationally unstable and develops spiral arms of enhanced density. These arms fragments and build up new companion stars. Within only 110 years already three protostars have been born (as indicated by the symbols) and a fourth one is beginning to form (in the upper left region of the last figure in the sequence).

According to Dr. Clark, this realisation opens up exciting new avenues for detecting the first stars in the universe. In the final stages of their lives, binaries or multiple stellar systems can produce intense bursts of X-rays or gamma rays. Future space missions are being planned specifically to investigate such bursts from the early universe. It is also conceivable that some of the first stars may have been catapulted out of their birth group through collisions with their neighbours before they were able to accumulate a great deal of mass. Unlike short-lived high-mass stars, low-mass stars may survive for billions of years. “Intriguingly,” says Dr. Clark, “some low-mass primordial stars may even have survived to the present day, allowing us to probe the earliest stages of star and galaxy formation right in our own cosmic backyard.”

Together with Dr. Simon Glover and Dr. Rowan Smith, Dr. Paul Clark is a member of the star-formation research group headed by Prof. Dr. Ralf Klessen at Heidelberg University’s Centre for Astronomy. Also involved in the research were Dr. Thomas Greif of the Max Planck Institute for Astrophysics (Garching) and Prof. Dr. Volker Bromm of the University of Texas. This research was funded by the Baden-Württemberg Foundation as part of the International Top-Level Research II programme. Additional support came from the FRONTIER innovation fund of Heidelberg University as well as the German Research Foundation, the US National Science Foundation, and NASA.

For more information, go to www.ita.uni-heidelberg.de/research/klessen/science/starformation.shtml.

Note for news desks:
Digital photo material is available from the Press Office.