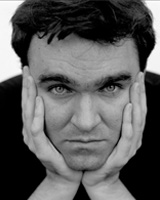 At the Marsilius Lecture on 8 July 2010, renowned composer and clarinettist Jörg Widmann will discuss “Tradition and Innovation in Music”. His lecture, which features musical highlights, takes its cue from Robert Schumann’s dictum, “the future should be the higher echo of the past”. Heidelberg University’s Marsilius Kolleg extends a cordial invitation to all interested in the subject.

In his lecture, Widmann will demonstrate how productive the apparent tension between honouring traditional musical forms while striving for new expressive potential can be for the creative process of composing. He will also point out the commonalities and differences between the creative processes in art and in science or scholarship. Alongside classical works by Mozart and Schumann, Widmann will draw on his own works to illustrate his insights. He will also perform Stravinsky’s "Three Pieces for Solo Clarinet" (1919) and his own "Fantasy for Solo Clarinet" (1993).

Jörg Widmann was born in Munich in 1973. At the early age of 11 he received instruction in composition from Kay Westermann. Among his later teachers were the composers Hans Werner Henze and Wolfgang Rihm. He completed his studies as a clarinettist at Munich’s University for Music and Performing Arts  and the Juilliard School of Music in New York. A number of clarinet concertos have been dedicated to him. His own oeuvre ranges from chamber music and vocal music to orchestral compositions and stage works. He has received various prestigious awards and distinctions. For two years he was a fellow at the Institute for Advanced Study in Berlin and he is a member of the Bavarian Academy of Fine Arts in Munich. At the Freiburg College of Music, he holds a dual professorship for clarinet and composition.

The Marsilius Kolleg is an integral component of Heidelberg University’s institutional strategy for the future. The work of the institution is geared toward bringing together selected researchers from diverse academic cultures and thus furthering the research-related dialogue between the humanities, law and the social sciences, on the one hand, and the natural and life sciences on the other. The Marsilius Lectures are directed toward a general audience.

Jörg Widmann’s lecture “The Future Should Be the Higher Echo of the Past (Robert Schumann): Tradition and Innovation in Music” will be held in the Great Hall of the Old University (Grabengasse 1) at 4 p.m. on 8 July 2010. It can also be viewed on the internet via live stream: www.marsilius-kolleg.uni-heidelberg.de.