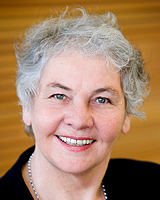 Nobel Prize laureate Prof. Dr. Christiane Nüsslein-Volhard will be visiting Heidelberg University on 4 February 2010. The renowned molecular biologist from the Max Planck Institute for Developmental Biology (Tübingen) was awarded the Nobel Prize in Medicine in 1995. In her Marsilius Lecture, she will be addressing the topic of “Growth in Nature and Culture”.

On the one hand, the term “growth” arouses hopes of greater affluence and upward social mobility. On the other hand, it is associated with one of humanity’s greatest problems and its repercussions: the rapid growth of population. This is not only one of the major causes of climate change; it also generates problems such as famines, poverty and refugee waves. In her lecture, Prof. Nüsslein-Volhard will discuss fundamental growth mechanisms in nature and indicate how cultural skills have enabled humanity to influence natural growth and decay processes. In addition, she will elaborate on the meaning of the breeding and modification of plants and animals for humanity’s growth potential. In this context, she will also examine issues posed by green genetic engineering.

Christiane Nüsslein-Volhard has been director at the Max Planck Institute for Developmental Biology in Tübingen since 1985. Her research interests concern the molecular and genetic analysis of development. She has received numerous honours, distinctions and awards for the discovery of genes that control the development in animals and humans, and the demonstration of morphogen gradients in the fly embryo. From 2001 to 2006, she had been a member of the federal government’s National Ethics Council. Since 2005, sheffur has been a member of the Scientific Council of the EU’s European Research Council (ERC). In 2004, she established the Christiane Nüsslein-Volhard Foundation aimed at supporting young female scientists with children.

The Marsilius Kolleg is a central feature of Heidelberg’s Institutional Strategy. It is designed to bring together handpicked researchers from different academic cultures, thereby promoting a research-based dialogue between the humanities, the social sciences, legal studies and the natural and life sciences. The Marsilius Lectures are directed towards the general public.

Professor Nüsslein-Volhard’s Marsilius Lecture will be held in the Great Hall of the Old University (Grabengasse 1) at 4 p.m. Admission free.

The lecture will be transmitted on the Internet via Livestream: www.marsilius-kolleg.uni-heidelberg.de