Was Our Primeval Sun Hyperactive?

Researchers discover evidence in a meteorite from the early Solar System 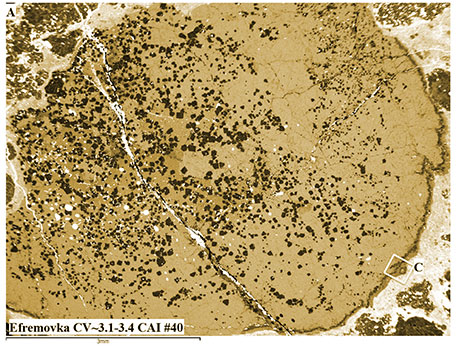 Shortly after its birth, our Sun was probably a very turbulent, hyperactive star. This is indicated by geoscientific analyses of rock inclusions from a meteorite originating in our early Solar System. In those inclusions, researchers from Heidelberg University detected decay products of a very short-lived radioactive isotope that can only have been generated by an intense burst of radiation from the nascent young Sun. The scientists consider this strong proof of an intermittently highly active primeval Sun.

The Sun, along with our Earth and the other planets, originated 4.6 billion years ago from a cloud of cosmic gas and dust. Smaller bodies such as asteroids and comets also remained and encased the oldest centimetre-sized solids from our Solar System, conserving them until this day. Pieces of asteroids fell to the Earth in the form of meteorites, allowing the inclusions to be studied in great detail using high-precision instruments. These structures consist of calcium and aluminium-rich minerals and also contain decay products of radionuclides with a relatively short half-life of less than one million years.

In one of these calcium-aluminium-rich inclusions, cosmochemist Dr Ritesh Mishra detected decay products of the radioactive isotope 7Be (beryllium), which has a half-life of only 53 days. "An isotope with so short a half-life could not have been produced in another star and then been transported to the early Solar System. That would have taken far too long. It therefore must have come from highly intensive radiation by an active young Sun," explains primary author Dr Mishra of the NASA Johnson Space Center in Houston (USA), who worked on the study during his tenure as an Alexander von Humboldt fellow at Heidelberg University.

"We know from astronomical observations that young stars are sometimes extremely restless and emit bursts of radiation. Because of the Sun's eminent age, only very rare old rocks can be used to reconstruct its early activity," explains Prof. Dr Mario Trieloff, director of the Klaus Tschira Laboratory for Cosmochemistry at Heidelberg University's Institute for Earth Sciences and head of the working group in which Ritesh Mishra was a member. According to Prof. Trieloff, analyses indicate that the burst of radiation occurred approximately half a million years after the birth of the Sun and lasted about one year.

The researchers investigated the calcium-aluminium-rich inclusions of the Efremovka meteorite, whose remains were discovered in Kazakhstan in 1962. Measurements were taken using a cutting-edge ion probe, which was able to detect only the slightest isotope excesses on the smallest spatial scale. The findings were published in the journal "Nature Astronomy".