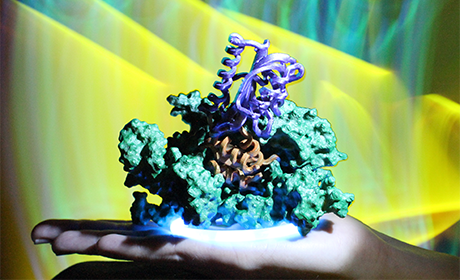 A new molecular precision tool now makes it possible to alter the genome in human cell cultures more selectively than ever before. The tool known as the CRISPR/Cas9 gene scissors is controlled externally using an optogenetic process. To make this process possible, anti-CRISPR proteins were genetically engineered so they could be turned on and off – with light. The tool, called CASANOVA, was developed by Dr Dominik Niopek of Heidelberg University and Prof. Dr Roland Eils of the Berlin Institute for Health Research and formerly with Ruperto Carola and the German Cancer Research Center.

CRISPR/Cas9 is a molecular biological method to selectively cut and then modify the genome. In this way, individual letters of the DNA can be rewritten or edited. The CRISPR/Cas system originates from bacteria. Using the underlying mechanism – bringing about a break in the double DNA strand and thereby activating the subsequent “natural” repair – scientists developed a gene editing process that functions universally in all living cells. To selectively start or stop this process externally, Dr Niopek and Prof. Eils are working with anti-CRISPR proteins. These are small proteins from bacteria-infecting viruses that are able to bind the CRISPR gene scissors. When bound, the gene scissors are blind and no longer able to reach their target sequence within the genome.

The researchers integrated a molecular light sensor from the oat plant into an anti-CRISPR protein. They then introduced the resulting hybrid protein – called CASANOVA – together with the CRISPR gene scissors into cultured human cells. “In the dark, CASANOVA efficiently binds to the scissors, thereby switching them off. Blue light releases the CRISPR gene scissors from the anti-CRISPR protein, thereby becoming active,“ explains Dr Niopek. With their new method, the researchers were able to induce precise genome changes in human cells through external illumination. They could further switch on and off selected genes at the touch of a button. The scientists were even able to follow the binding dynamics of the CRISPR gene scissors to their genomic target sequence in living cells under the microscope.

“CASANOVA is not only an innovative tool for basic research, for example, to study the interaction between the activity of genes and the behaviour of cells,” explains Prof. Eils. “The method could also become relevant in the future for particularly precise therapies used to treat genetic diseases.”

Roland Eils is the Director of the Digital Health Center at the Berlin Institute of Health and Charité – University Medicine Berlin, as well as Director of the Health Data Science Unit at Heidelberg University Hospital. Dominik Niopek leads the Synthetic Biology research group at the Institute for Pharmacy and Molecular Biotechnology and the BioQuant Centre of Heidelberg University. The results of the research, to which Ruperto Carola students also contributed, were published in the journal “Nature Methods”.