Emergency Route Planner for Nepal on the Internet 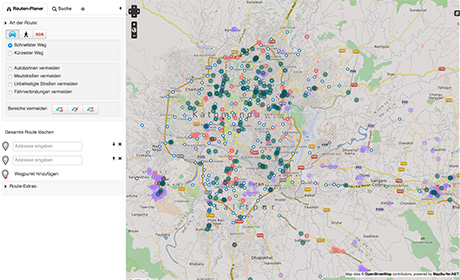 Detail from the emergency route planner

To support the rescue efforts in Nepal after the devastating earthquake, geoinformatic scientists from Heidelberg University have set up an emergency route planner on the Internet. Resuce workers can check the local infrastructure conditions and locate the best route around blocked roads and regions. They can also obtain information on key points of contact such as hospitals, rescue centres and emergency camps. The route planner, already in use by the United Nations Logistics Cluster, is based on the OpenRouteService of the Heidelberg working group led by Prof. Dr. Alexander Zipf. The service uses the free geographical data supplied by the Wiki-like world map OpenStreetMap (OSM). It is updated every 30 minutes based on the data continually compiled by the worldwide OSM community.

The routing service also offers analysis tools to help rescue workers quickly determine a location’s accessibility. Routes can also be downloaded to mobile devices, allowing their use without an Internet connection. The emergency route planner developed at the Institute of Geography supports the activities of the Humanitarian OpenStreetMap Team (H.O.T.) and other aid organisations after the catastrophic earthquake. The Kathmandu Living Labs team is coordinating the mapping endeavours. This organisation in Nepal advocates the advancement of open data such as OSM as well as relevant technologies; it is a long-time cooperation partner of the Institute of Geography on site.

To collect and update the necessary map data, disaster mapping events were held on 27 April for students and employees of the Institute of Geography. They worked collectively on the OpenStreetMap data basis by drawing in missing map objects from air and satellite images. “The mapping work goes on through our efforts and those of other volunteers from the OSM community worldwide, thus continually adding to and updating the data basis in OpenStreetMap,” explains Andreas Reimer, who is coordinating the work on the route planner and the maps. “Our programs automatically retrieve the latest data from the central OSM database every 30 minutes to update our route planners and maps.

The Geoinformatics Working Group of Heidelberg University also provided similar services to rescue workers during past disasters, such as the 2010 earthquake in Haiti and Typhoon Haiyan on the Philippines in 2013.