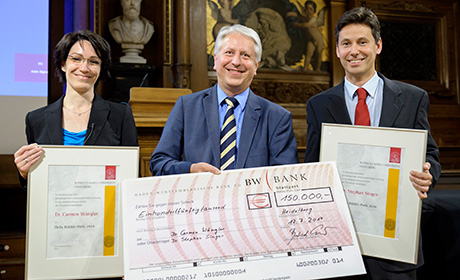 Radiochemist and Associate Professor Dr. Carmen Wängler and pathologist Dr. Stephan Singer have received this year’s Hella Bühler Prize. The prize is aimed at young researchers at Heidelberg University whose outstanding cancer research has garnered well-deserved attention. The prize will be used to further advance their innovative research. Dr. Wängler leads a working group at the Institute of Clinical Radiology and Nuclear Medicine at the Medical Faculty Mannheim. Dr. Singer is a research associate at the Institute of Pathology of Heidelberg University Hospital. The Rector of Heidelberg University, Prof. Dr. Bernhard Eitel, presented the certificates for this year’s prize, which is endowed with EUR 150,000 and will be shared equally between the two researchers. The award ceremony was held on 17 July 2014 in the Great Hall of the Old University.

Rector Eitel as well as Heidelberg biochemist Prof. Dr. Felix Wieland, chairman of the prize jury, provided opening remarks to the ceremony. They were followed by the 2013 honouree, tumour biologist Dr. Sven Diederichs, who gave a short overview on the advancement and the progress of his research. Prof. Dr. Stefan Schönberg, Director of the Institute of Clinical Radiology and Nuclear Medicine, and Prof. Dr. Peter Schirmacher, Executive Director of the Institute of Pathology, offered their congratulatory remarks to this year’s award winners. Carmen Wängler and Stephan Singer then introduced their research work. Dr. Wängler discussed new approaches to improved diagnostics for prostate carcinomas. In his talk, Dr. Singer explained the nuclear pore complex as a modulator of cancer-relevant signal pathways.

Carmen Wängler (b. 1978) studied chemistry with a focus on nuclear chemistry at the University of Mainz. After graduation she joined the German Cancer Research Center in Heidelberg to prepare her dissertation within the framework of a doctoral scholarship. Her work on special issues in cancer diagnostics earned her a doctorate at the Faculty of Biosciences at Heidelberg University in 2007. After a two-year fellowship in Canada, Dr. Wängler spent 2010 to 2013 at Ludwig Maximilians University of Munich (LMU) as leader of a junior research group supported by the Chemical Industry Fund. She completed her habilitation at LMU in 2011 in experimental nuclear medicine with a focus on molecular imaging. She has led the working group for biomedical chemistry at the Institute of Clinical Radiology and Nuclear Medicine at the University Medical Centre Mannheim since March of last year.

Dr. Wängler’s research work explores the development of new radiopharmaceuticals for more efficient and individualised cancer diagnostics, especially new targeting approaches for prostate carcinomas. According to the researcher, such tumour cells cannot be identified efficiently enough using current imaging technologies because the corresponding markers on the cells are often too scant to differentiate them from healthy tissue. The radiochemist is developing what is known as heterobivalent, radiolabeled peptides for improving visualisation of prostate carcinomas.

Stephan Singer (b. 1974) studied human medicine at Heidelberg University and received his doctorate in pathology in 2005 at the Medical Faculty Heidelberg. He subsequently completed his specialisation at the Institute of Pathology at Heidelberg University Hospital and conducted research in molecular (hepato-)carcinogenesis. A grant from the German Research Foundation allowed him to conduct research at Columbia University in New York (USA) from 2008 to 2010. He returned to Heidelberg University in 2011. Dr. Singer’s work was funded within the framework of the Transregional Collaborative Research Centre “Liver Cancer – From Molecular Pathogenesis to Targeted Therapies”. His research is currently supported by a fellowship from the Heidelberg Research Centre for Molecular Medicine (HRCMM) in collaboration with the European Molecular Biology Laboratory (EMBL).

Dr. Singer’s work is devoted to the biological process of tumour suppression with a special focus on the nuclear pore complex (NPC). According to the researcher, components of NPC called nucleoporins or Nups, such as Nup98, can play an important role in the development of cancer. Over the next few years, Stephan Singer wants to study compositional changes of the NPC in the development of liver cancer including functional, diagnostic, and therapeutic aspects.

The research prize, endowed by Heidelberg dentist Dr. Hella Bühler (1910 to 2002) is aimed at supporting young Heidelberg researchers to continue and deepen their ongoing excellent work in the field of cancer research.