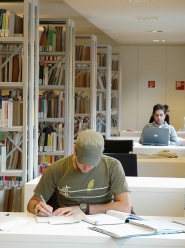 The Bachelor is a so-called polyvalent degree. On the one hand, it is a “normal” degree, which can precede a Master’s degree. It can however also form the basis of an education degree for those students who seek to later teach at the upper secondary level (Gymnasium): graduates of the Bachelor’s program can continue their studies with a Master of Education. Regardless of what students may wish to do after the Bachelor, the content of the degree program is the same; the programs differ only with regard to the general studies courses that students chose.

The Bachelor’s program consists of various modules – most of which comprise two courses and their examinations for a total of 10 credit points (exception: Module POL_P1). The major (BA 75% and BA 50%) has two phases.

During the first three semesters students take introductory mandatory and compulsory elective courses (POL_P1 to POL_P7). The modules generally consist of a lecture and a seminar or tutorial the course contents of which complement or build on one another.

In the second phase students will build upon the foundations laid in the first: They can select an area to focus on and have many more options in terms of which elective courses to take. Elective modules are comprised of two courses from the same area; the areas correspond to modules 2 to 7 listed in the table below.

The Bachelor’s program ends with the completion of a Bachelor’s thesis in the first major.

Mandatory and Compulsory Elective Modules in the Bachelor’s Degree Program