With the friendly support
of the DFG (German Research Council) 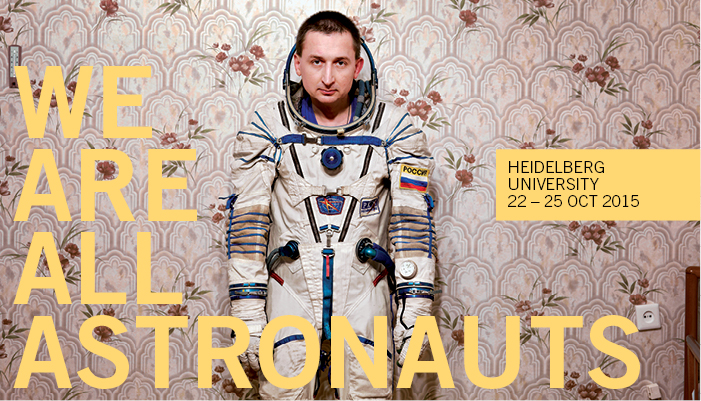 The Image of the Space Traveller in Arts and Media

“We are all astronauts“, the American architect and thinker Richard Buckminster Fuller wrote in his 1968 book “Operating Manual For Spaceship Earth“ where he compared Earth to a spaceship, provided only with exhaustible resources while flying through space.

The phrase is on the one hand a hint, which position the phenomenon of the astro- and the cosmonaut had in the public conscience from the second half of the 20th century on; on the other hand the wording might have played a significant role itself in shaping the space-exploring human as a symbol and an image of humankind in general.

With Buckminster Fuller‘s phrase, however, at the same time a turn in the view on astro- and cosmonauts seemed to be announced: While they – according to the impression gained at first glance – were first presented and conceived as courageous heroes and popular figures for identification, this image began to tilt by no later than the beginning of the 70s. In his book “Moon Dust” (2005) the journalist Andrew Smith puts this in relation to the epoch-classification which the British historian Eric Hobsbawm had defined in his book „Age of Extremes: The Short Twentieth Century 1914 – 1991“ (1994). Hobsbawm there distinguishes a “Golden Age“ (1945 – 1972) that encompasses the dawn of “the Space Age“, the ensuing “landslide“ and, eventually, the “crisis decades“. The first phase of the “Space Age”, marked by “upheaval, uncertainty, optimism, energy“, would then, according to Smith, have reverted into a skeptical and pessimistic era that did find itself disappointed by its own hopes and where its former heroes would have lost all their splendor.
Buckminster Fuller’s metaphor of humankind as the crew of a spaceship “Earth” now did take on admonishing streaks: “So, planners, architects, and engineers take the initiative“, Buckminster Fuller summons towards the end of his book to tackle the ensuing challenges (the necessity to care for this spaceship Earth and solution of the problem of its exhaustible resources…). But while even behind his text still a certain optimism towards science can be detected, the image of the astro- and the cosmonaut in the arts and in the media subsequently – and up to today – appears to be rather negative: they are mostly depicted as deceived, failing or failed and lonesome characters.

Given such depictions, one feels reminded of the quote of the American Science Fiction-author A(lfred) A(ngelo) Attanasio: “Being human is the most terrible loneliness in the universe“. These words were thus not by accident also used in 2011 as a prefix to the music video to the song “Astronaut” by the Canadian rock band Simple Plan where the iconography of loneliness and isolation of astronauts is put into moving images, accompanied by the music.
Also here, in the genre of the music video as well as of the film, we thus encounter the failing or failed astronaut.

But not only as victims, but also as culprits astronauts are depicted there: In the 2013 music video, designed by Delo Creative for the song “Ashes In The Air” by the American rock band The Flaming Lips (a cooperation with the American singer-songwriter-project Bon Iver), an astronaut is presented who first saves a baby (wearing the head of an adult) out of a crashed space capsule before then throwing it into a mincer.

Such representations are all the more striking if they are compared to the through and through positive visual interpretations astro- and cosmonauts did receive in the East as well as in the West during the 60s (think for example about the mosaic in in Mellingen, celebrating the cosmonaut Valentina Tereshkova or the murals “Space Earth Human Being”, executed in 1969 by the German artist Otto Schutzmeister in Eisenhüttenstadt). Even a contemporary artist such as the American Tom Sachs is apparently impressed by the Apollo-space-program of the 60s and 70s when, in his installation “Space Program“ from 2007, he declares to pay (an ironic?) homage to the “homespun technical ingenuity and romance with the unknown that brought America the Apollo program“ (according to the above mentioned Smith anyway “an emanation of popular culture before […] anything else“).

But if one sheds a look, now sensitised by this material, back into the past, one discovers that actually already earlier depictions of space travelers in literature and film sometimes reveal darker undertones.

It is perhaps also in the light of such a sombre background that the music video, shot in 2013 by the Canadian astronaut Chris Hadfield on board of the ISS to his own cover version of David Bowie’s “Space Oddity”, has to be viewed. Bowie’s song from 1969 was also accompanied by promoting video clips and it deals with Major Tom, who, “in a most peculiar way” floats in space and seems to get lost between the stars (something that was interpreted in 1969 by director Malcolm J Thomson in his clip for Bowie’s song by images of an astronaut who meets two space sirens, luring him into pulling off his protective suit while still being in space).
Hadfield’s music video, shot 44 years later, immediately caused an enormous media hype and in fact Hadfield’s clip is remarkable on several counts.
First, because – after a longer phase of a rather negative representation of astronauts as failing, deceived and confused anti-heroes – he presented again a positive counter-image of the space traveller. Even though his video has (already due to its underlying music) also melancholic moments, nevertheless the beauty of the sequences of Hadfield’s, moreover “real” (that is: refraining from special effects) images of zero gravity and views on a nightly Earth, the fact that Hadfield had made the clip as a farewell from the ISS, and the general aura of “coolness“, surrounding Hadfield’s persona (who then also posed for the cover of the October-issue of the Canadian magazine “Maclean’s“ in a Ziggy-Stardust-look) made that the image of the astronaut now has acquired positive features again (something the German astronaut Alexander Gerst could build upon whilst staying at the ISS from May to November 2014).
Second, Hadfield’s endeavour is interesting inasmuch as it ties in with an older tradition (earlier, in 2010, already taken up by Snoop Dogg and Edwin “Buzz“ Aldrin with their music piece “Rocket Experience”) of music-making astronauts who were already discovered and used by the advertising industry during the Golden Years of the Space Age: On the 16th of December 1965 astronaut Walter Schirra on board of his space ship Gemini 6 intonated during a radio contact with Earth on a mini-harmonica that he had smuggled with him the song “Jingle Bells“. This inspired Hohner, the company that produces these instruments, to publish an advert which read: “Buy a Hohner harmonica. Learn to play ‚Jingle Bells‘. And 3 billion people just might look up to you.“

The event is free of charge. For organisational reasons we however ask to, please, register in advance via e-mail to k.lau@zegk.uni-heidelberg.de or via mail to