​In-situ mobilization of arsenic within an aquifer

At the site Lampertheim-Neuschloss in Hessen the operation of a chemical factory during the last century led to the contamination of the subsurface. Within the framework of a practical research project of the working group Hydrogeochemistry and Hydrogeology, the location was examined in detail regarding arsenic mobility (section “former projects”). Concurrently different options to deal with the contaminated site were discussed. On this occasion, active mobilization of arsenic was evaluated as an expedient method to optimize the ongoing pump-and-treat remediation.

Basis of this assessment were several column experiments, in which accelerated arsenic release could be triggered by the addition of phosphate under different geochemical milieu conditions. Accordingly, small amounts of phosphate seemed to support biochemical processes while high dosages intensified the geochemical processes. The column experiments showed, that sorbed arsenic resolved completely from the sediment matrix under favorable conditions.

On behalf of the HIM ASG this evaluation was verified within the framework of a variation study to optimize the current groundwater remediation done by the engineering firm CDM Smith Consult GmbH, branch Rhein-Main. In a next step, the University of Heidelberg conducted further experiments to elaborate the transfer of the laboratory results into the location. This was done in close cooperation with the project participants and finally submitted to the regional council of Darmstadt for authorization.

First results show, that the laboratory experiments are well transferable to the site. With the low dose substrate addition, the flushing was as high as or even higher than expected. However, the laboratory trials showed as well, that high substrate dosages led to the occurrence of interactions with solved calcium.  Before applying this method to the field site, the problem of precipitation was examined more closely and a technical solution to stabilize the substrates successfully tested.

For the transfer into the field site, a test field with three infiltration wells (IB1 to IB 3) and seven monitoring wells was installed. Water abstraction from GW 29 hydraulically secured this test field. The abstracted water is cleaned in the available water treatment plant. First results indicate, that the addition of phosphate leads to a faster desorption of arsenic from the sediment. Based on current knowledge, this leads at least to a three times faster flushing compared to untreated conditions.

Due to the low substrate dosage used it can be assumed, that the flushing rates can be accelerated even more.

For the systematic mobilization of arsenic three processes can be utilized (Maier 2014): Competitive complexation is based on a similar behavior of Arsenate (AsV) and Phosphate to sorb on mineral surfaces. Since phosphate has a higher affinity for surface complexation than arsenic, the latter is displaced from the mineral surfaces. If phosphate is applied in surplus, it occupies all available surfaces and Arsenate stays in solution.

Under anoxic conditions the mineral surfaces are partially dissolved, resulting in generally less sorptive surfaces. Furthermore, As(V) is microbially reduced to As(III). Surface complexation only plays a subordinate role for reduced arsenic, which makes it more mobile than the oxidized form. The addition of phosphate enhances microbial reduction. 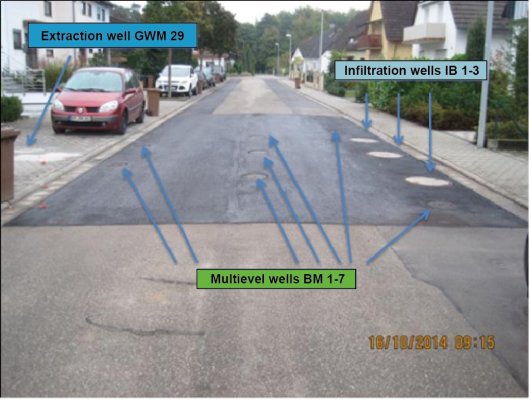 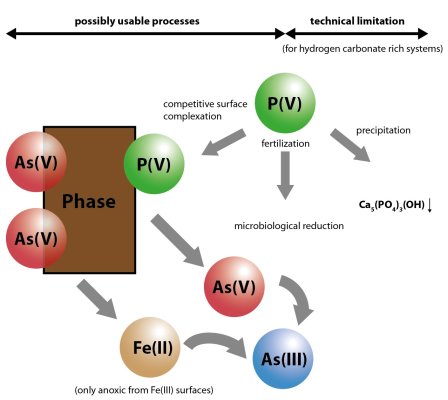 This research project offered the opportunity for major parts of a dissertation, two diploma thesis, one master thesis and four bachelor theses. The aim is to publish the results in at least three international, peer-reviewed scientific journals.