Meeting of the Hekksagon Alliance and Honorary Doctorate 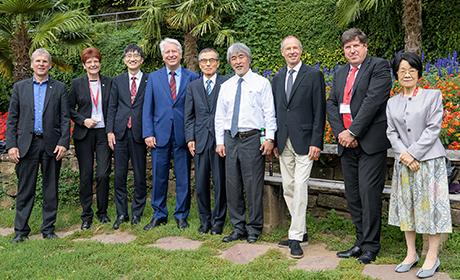 The seventh meeting of the university presidents of the German-Japanese university consortium HeKKSaGOn in September 2019, which brought roughly 220 participants to Heidelberg, ended with the signing of a joint declaration on the future development of the alliance. Accompanied by numerous scientists and scholars, representatives of the university administrations and students, the rectors and presidents of the six partner institutions met for two days at Heidelberg University to review the progress of existing cooperation projects and discuss their plans for the future. Founded in 2010, the HeKKSaGOn alliance consists of Heidelberg University, the University of Göttingen and the Karlsruhe Institute of Technology on the German side and three leading Japanese universities – Kyoto, Osaka and Tohoku in Sendai. 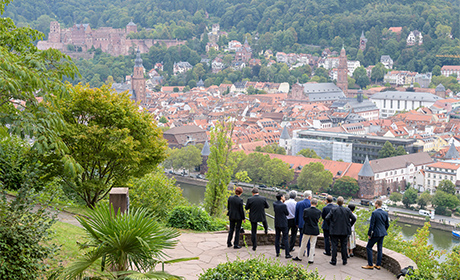 The rectors and presidents of the six participating universities spent two days in Heidelberg.

This consortium – which is unprecedented in the history of German-Japanese cooperation – aims at intensifying the universities’ collaboration in research and teaching. To this end, the partners in Germany and Japan launch joint research projects, develop transnational study and PhD programmes and promote the exchange of researchers, doctoral candidates and students via summer and winter schools and other initiatives. The HeKKSaGOn alliance has set up work groups in several pioneering research fields, such as the environmental and material sciences, the neurosciences and life sciences, scientific computing and the social and cultural sciences. Kyoto University and Heidelberg University have each opened an office on the other partner’s campus. These offices act as ‘communication bridges’ for the HeKKSaGOn alliance. 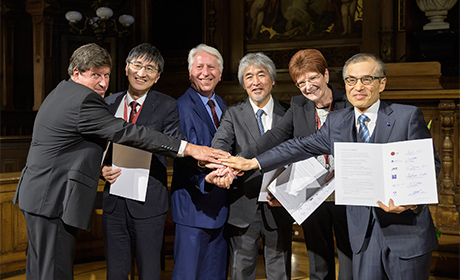 Founded in 2010, the HeKKSaGOn alliance consists of Heidelberg University, the University of Göttingen and the Karlsruhe Institute of Technology on the German side and three leading Japanese universities – Kyoto, Osaka and Tohoku in Sendai.

In November, Heidelberg University’s Faculty of Law awarded an honorary doctorate to Japanese jurist Prof. Ryuji Yamamoto. With this decision, the faculty recognised Prof. Yamamoto’s outstanding research and teaching in the field of public law, particularly administrative law, and his contribution to academic cooperation between German and Japanese colleagues. Prof. Yamamoto received his undergraduate degree and post-graduate education at the University of Tokyo, where he subsequently accepted a research and teaching position in 2004. He has published numerous academic papers and serves on advisory committees to the Japanese government. Ryuji Yamamoto has had close ties with the Heidelberg Faculty of Law for more than 20 years. 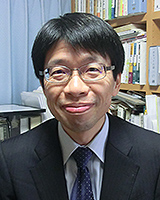 „Ryuji Yamamoto is an eminent researcher in jurisprudence who has made exceptional contributions in service to German-Japanese exchange in administrative law, thereby cultivating a particularly close relationship with the Faculty of Law at Heidelberg University,” emphasises the Dean of the faculty, Prof. Dr Ekkehart Reimer. As an enthusiastic lecturer and academic dialogue partner – not least for doctoral and habilitation candidates – he has also long enriched teaching at the Heidelberg Faculty of Law. The Japanese law scholar has been a guest at Ruperto Carola nearly every year since 1995.

According to Prof. Dr Wolfgang Kahl, Executive Director of the Institute for German and European Administrative Law, Prof. Yamamoto delves into both the basic and practical issues of administrative law – always through the prism of constitutional law. “His intensive work in comparative law with Germany is particularly noteworthy. In that regard, Ryuji Yamamoto serves a valuable function as an academic bridge and transfer agent,” states Prof. Kahl. The honorary doctorate is being given to Prof. Yamamoto for “services to the foundation of an administrative legal system in Japan and Germany as well as exchange in the field of administrative law,” as cited in the justification statement for issuing the honorary doctorate. 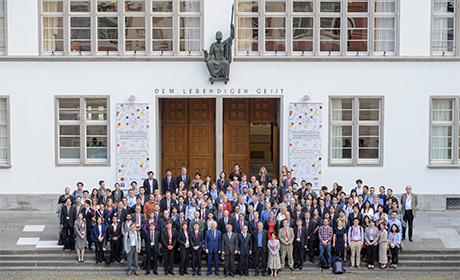 The participants of the meeting in front of the New University in Heidelberg.
Email: Editor
Latest Revision: 2020-02-27