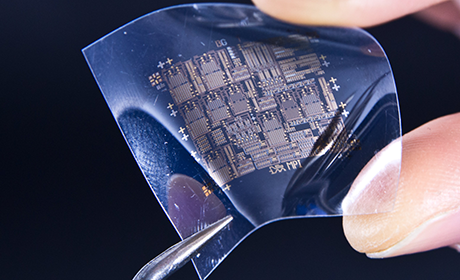 A new Collaborative Research Centre in chemistry was launched at Heidelberg University in January 2017. CRC 1249 ‘N-Heteropolycycles as Functional Materials’, which includes 17 subprojects, focuses on the development of new organic semiconductors and the investigation of elementary processes of charge transport that define their properties. The German Research Foundation (DFG) will support the project with roughly nine million euros in funding over the next four years. The DFG has also allocated approx. 3.5 million euros to a new Research Training Group in the field of interdisciplinary American studies: The group named ‘Authority and Trust in American Culture, Society, History and Politics’ is based at the Heidelberg Center for American Studies (HCA). The first funding period of four and a half years begins in October 2017.

According to CRC-spokesperson Prof. Dr Lutz H. Gade of the Institute of Inorganic Chemistry, the semiconductors will be developed on the basis of a large and flexibly variable class of compounds, the N-heteropolycyclic aromatic hydrocarbons. The new electronic materials are not based on silicon or other inorganic semiconductors, but are organic hydrocarbon derivatives with ring structures that contain nitrogen atoms. Since these materials are "soft" and can be processed at low temperatures, flexible media such as plastic foil can be used as supports for electronic components. "Even though there is already a flurry of research activities surrounding the development of organic semiconductor materials, targeted access to new substance classes with specific material properties remains a major challenge," stresses Prof. Gade.

CRC 1249 will work on developing methods for chemical synthesis, studying the physical, spectroscopic and theoretical characteristics of the newly developed organic semiconductors, and investigating their material properties in optoelectronic devices. "The goal is to identify the essential structural elements determining the properties of these new substances, by way of close interplay of experiment and theory," states Prof. Gade. In addition to the Heidelberg University research groups from the institutes of chemistry, the Interdisciplinary Center for Scientific Computing, the Center for Advanced Materials and the Kirchhoff Institute for Physics, researchers from the Karlsruhe Institute for Technology and the Max Planck Institute for Solid State Research in Stuttgart will also participate in the new collaborative research centre.

The new research training group rests on the shoulders of ten researchers from different disciplines including geography, history, linguistics, literature, political science, and cultural and religious studies. In addition, associate scholars from Germany, Europe and North America will be involved in the new research training group. The first funding period will involve two cohorts of grantees, each including ten doctoral students, six research students, and one postdoctoral scholar. Prof. Dr Manfred Berg (Curt Engelhorn Chair of American History) will serve as spokesperson of the research training group; substitute spokesperson will be Prof. Dr Günter Leypoldt (Department of English Literature).

At the centre of the group’s research programme is the emergence and transformation of authority in state and civil society, social institutions, urban spaces, culture and religion, as well as the shifting trust relationships inside the United States and in the transatlantic world. The spokespersons point out that “due to its early democratisation, its egalitarian and libertarian political culture, its ethno-cultural heterogeneity, and its international predominance, the United States is a particularly interesting case study of how authority and trust relate to one another in the modern world”. Prof. Berg and Prof. Leypoldt note that this topic is of great current interest, not only for the humanities and social sciences but also for the general public. “The research training group will make important scholarly contributions to this field and at the same time offer an innovative qualification program that will help young scholars to launch their careers inside and outside academia.”