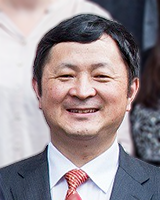 ‘Mental health in Germany and China’ was the subject of a student forum organised by the Medical Faculty of Heidelberg University – led by the Department of General Internal and Psychosomatic Medicine – and the Medical School of Tongji University in Shanghai on the occasion of the 20th anniversary of Heidelberg Alumni International (HAI). The symposium in Heidelberg was initiated by research alumnus Prof. Dr Xudong Zhao of Tongji University, who has maintained close ties with Heidelberg University since earning his doctorate there and regularly returns to Heidelberg as an international visiting scientist. The organisers are planning a long-term collaboration between the two universities in the field of psychosocial medicine in order to further deepen the existing Sino-German cooperation in research, clinic and teaching.

The student forum on 16 July 2016 was attended by 13 students of Tongji University, seven Chinese students currently enrolled in Germany, and five students of Heidelberg University from the fields of medicine and psychology. Under the heading ‘Sino-German Exchange about Mental Health in China and Germany’, they discussed a wide range of psychosomatic, psychotherapeutic and psychiatric issues – among them the Heidelberg Model of Psychosomatic Medicine, the significance of German psychosomatics for the continuing development of the Chinese health care system, advisory and short-term therapy concepts for students in Germany and China, and research on functional somatic syndromes, depression and schizophrenia. The programme also included an exchange on intercultural perspectives, such as the philosophical foundations of psychotherapy in the Taoist, Buddhist and Confucian traditions in China.

Initiator Xudong Zhao is a professor of psychology and psychiatry at Tongji University and heads the Department of Psychosomatic Medicine at Shanghai East Hospital, which is associated with the university. After completing his medical studies in China and working in the fields of neurology and psychiatry, he studied under Helm Stierlin at the Institute of Basic Psychoanalytical Research and Family Therapy of the Medical Faculty Heidelberg, where he obtained his doctoral degree in 1993. Following his return to China, Xudong Zhao was the first psychiatrist with a foreign doctoral degree and founded the first institute of psychotherapy and family therapy in China. He went on to serve on a commission for mental health of the Chinese Ministry of Health and eventually became president of the ‘German-Chinese Academy of Psychotherapy’ (DCAP), the first international professional association to systematically introduce psychotherapy in China.

Over the years, this cooperation grew into a German-Chinese research network on psychosomatics and psychotherapy. Besides the universities of Heidelberg and Shanghai, this network now includes additional German and Chinese and even one Danish university institution for psychosocial medicine and focuses on the continued investigation of functional somatic syndromes and on qualifying Chinese colleagues for the work in psychosocial medicine. With support from the Sino-German Center for Research Promotion, the network conducted a large-scale cross-sectional study on functional somatic syndromes in China and reported the results internationally in several publications. The network is already planning another study on disorder-specific, experience-oriented short-term group therapy for patients with functional somatic disorders in China.

‘Our relations with Germany have changed the face of psychiatry in China’, explains Xudong Zhao. ‘In the beginning, the objective was simply to offer medical care to psychotic patients, but since then psychiatrists in China have also developed programmes and departments of psychosomatic medicine.’ In recognition of these achievements, the leading German and Chinese members of DCAP, Margarete Haaß-Wiesegart and Xudong Zhao, were presented with the Sigmund Freud International Psychotherapy Award in 2008. ‘German psychosomatic medicine enjoys a very good reputation in China, and the psychotherapeutic approaches from Germany are regarded as excellent – Heidelberg has become a particularly important player in this respect’, underlines Prof. Zhao.

With the support of the DCAP, several delegations of the Chinese Ministry of Health were able to come to Heidelberg to learn about psychosomatic medicine and psychotherapy. ‘The new insights gained during these visits directly influenced our Mental Health Law, which has been in effect for three years’, explains Xudong Zhao. ‘This law is a very important achievement for Chinese society, and Xudong Zhao was able to contribute to it – he brought experiences, ideas and concepts to the table that were developed with the help of Heidelberg scientists’, says Dr Rainer Schäfert of the Department of General Internal and Psychosomatic Medicine at Heidelberg University Hospital.

On the occasion of the student forum, a delegation of high-ranking members of Tongji University visited Heidelberg University, among them the president of the Senate, the director of the International Office and representatives of the School of Medicine. Representatives of the medical faculties of both universities developed plans for an even closer collaboration of their research and teaching staff. The contacts are supported by the Chinese Ministry of Education and Health.

‘It’s impressive in many ways to see international visiting scientists so closely linked to the University’, says HAI director Silke Rodenberg. ‘By promoting international exchange, including the students in their work and thereby encouraging the next generation to get involved with Heidelberg University, they don’t just act in their own interests as scientists, but also commit to serving as research alumni and ambassadors of the University.’