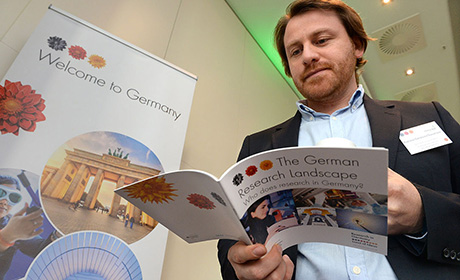 To improve the state of networking with research alumni, the Alexander von Humboldt Foundation invited international visiting scholars in Germany to convene in Berlin.

At German universities, the conscious fostering of alumni networks is still a relatively new approach. A recent survey by the Alexander von Humboldt Foundation (AvH) found that only three per cent of German universities with a strong research profile actually have well-established activities with their research alumni. Ten per cent have reached an intermediate status. For all other institutions, responses revealed that activities in this area are either non-existent or poorly coordinated. To improve this state of networking with research alumni, AvH invited around 50 international visiting scholars from 23 research institutions in Germany to convene in Berlin from 23 to 25 September 2015. As the winner of AvH's ideas competition "Research Alumni of German Universities", Heidelberg University was also able to send three visiting scholars to the conference, which is already in its third year.

The delegates from Heidelberg were classical philologist Dr Nikoletta Kanavou from Greece, pharmacologist Dr Hadeel Khallouf from Syria, and German scholar and comparatist Prof. Dr Sandro M. Moraldo from Italy. Nikoletta Kanavou conducts her research at Heidelberg University's Department of Classical Philology as the recipient of a two-year Humboldt Research Fellowship, which began in fall 2014. She began her academic career with a bachelor's degree in Athens and went on to complete her master's at the University of Oxford in England, where she also obtained her PhD. Hadeel Khallouf held a post-doctoral position from 2012 to 2015 in the Junior Research Group Immunotherapy and -prevention at the German Cancer Research Center (DKFZ). Prior to that she completed her bachelor's at the University of Damascus in Syria, followed by her master's at the University of Strasbourg in France. In 2011, she received her PhD in oncology while working at Heidelberg University Hospital. Sandro M. Moraldo is Professore associato of German Philology at the University of Bologna and Interim Professor of Comparative Literature and Linguistics at the Università Cattolica del Sacro Cuore in Milan. In the winter semester of 2014/15, he held the International Visiting Professorship for General and Comparative Literature – an Excellence project of Heidelberg University – at the Institute of German as a Foreign Language Philology, where he is also a regular guest lecturer. 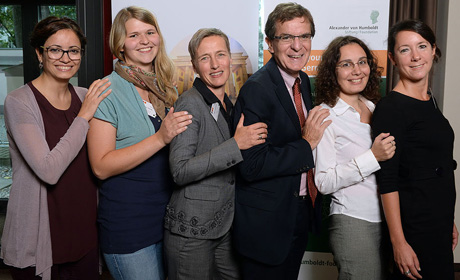 The objective of the event was to recruit future research alumni as "ambassadors" of German research institutions while strengthening their bonds with the host universities from the very first day. In addition, research alumni representatives from participating research institutions could inform attendees about alumni activities at various European institutions. The research alumni received comprehensive information about the research landscape and career opportunities in Germany, as well as the different funding options. These topics were addressed in a podium discussion with representatives of the most important German science and research funding institutions, moderated by Barbara Sheldon, Heidelberg alumna and head of the Strategic Planning division of the Humboldt Foundation. In addition, scholars could also chat with institutional representatives and learn about the programmes offered by attending institutions such the German Academic Exchange Service (DAAD) and the European Research Council. In workshops, attendees discussed the advantages and disadvantages of Germany's research structures, necessary improvements in the planning and execution of research stays, and ways that visiting researchers can act as ambassadors and multipliers after their stay.

In her dinner speech on the first evening, Elizabeth E. Lyons from the US National Science Foundation touched on the important role of scientists as diplomats – which can also be seen, as Lyons mentioned, by their strong representation in government institutions. "Diplomacy means improving relations between countries – and scientists are good diplomats because they share common scientific standards, they collaborate worldwide, learn quickly, and are analytic and communicative", she emphasised. "Researchers collaborate across national boundaries, even when countries have cut off diplomatic ties."

"The event showed how important it is for German universities and research organisations to build a national and international network of current and former research alumni who can report on their impressions and experiences in Germany when they return home", said Heidelberg research alumnus Sandro Moraldo. "As an “ambassador” for Ruperto Carola, it goes without saying that when I am back in Italy, I will do my best to promote Germany, and especially Heidelberg University, as a prime location for scientists."