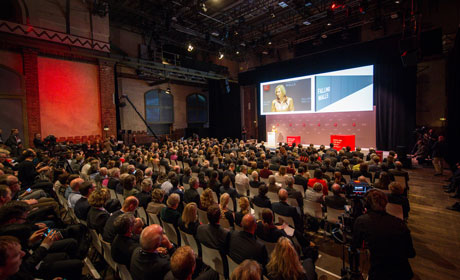 Overcoming walls and limits – both in word and in deed – that is the goal of the "Falling Walls Conference", which has been held every year on 9 November in Berlin since 2009. Inspired by the fall of the Berlin Wall in 1989, the international conference serves as a venue for leading international scientists from various disciplines to present their current projects and discuss solutions for global challenges with their fellow scholars. Physicist Prof. Dr Raju Venugopalan, currently a visiting professor at Heidelberg University, was among the approximately 770 researchers, artists, politicians, business leaders and journalists from 80 countries who took part in the seventh "Falling Walls Conference – The International Conference on Future Breakthroughs in Science and Society" from 8 to 10 November 2015.

In short talks, 18 top researchers presented approaches and discoveries with the potential for ground-breaking change. Arjen Hoekstra from the University of Twente in Enschede (Netherlands) spoke about his water footprint concept that can be used to calculate the quantity of water that is directly or indirectly involved in the production of specific goods or services. With this new tool, Hoekstra, one of the world's leading experts in water management, has laid the groundwork for a new interdisciplinary research field. Additional talks were given in areas such as astrophysics, nanotechnology, climate research, dementia research or neuroscience.

Among the notable presenters was Heidelberg alumnus and Nobel Prize recipient Wolfgang Ketterle from the Massachusetts Institute of Technology (MIT) in Cambridge, near Boston. Ketterle and two of his colleagues received the 2001 Nobel Prize in Physics for their experimental investigations of Bose-Einstein condensates. In Berlin he spoke about how he pushed past conventional boundaries in physics with his work on ultra-cold atoms to break into new conceptual territory. Raju Venugopalan especially appreciated the opportunity to share ideas with his fellow colleagues Ketterle and another Nobel Prize recipient in Physics, the American researcher Brian Schmidt, as well as to hear their "excellent talks". Venugopalan, currently in residence at the Institute for Theoretical Physics at Ruperto Carola, confided that he initially had doubts as to the impact of the conference. Then he realised how energised he felt after talking with the diverse array of participants. "One direct impact is that it made me think about how to present my research to a wide audience in the most effective way possible." Venugopalan works as a physicist at the Brookhaven National Laboratory in Brookhaven (USA) and is Adjunct Professor at Stony Brook University. 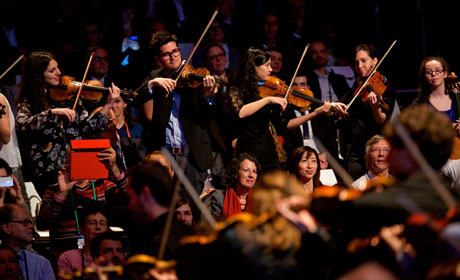 During the conference, the "Falling Walls Young Innovators of the Year 2015" were chosen from a pool of 100 young researchers, entrepreneurs and innovators from 44 countries. An international jury declared Dr Sabrina Badir from the Swiss Federal Institute of Technology in Zurich (ETHZ) the winner. Badir developed an intuitive and reliable device to help diagnose premature birth risk, which helps physicians act promptly to initiate appropriate therapies.

The conference is organised by the non-profit Falling Walls Foundation in Berlin. Funding is provided by the Federal Ministry of Education and Research, the Helmholtz Association and the Robert Bosch Stiftung. Additional supporters include a wide range of scientific institutes and foundations such as the Leibniz Association, Fraunhofer-Gesellschaft, Max Planck Society, Stifterverband, German Academic Exchange Service (DAAD) and European Research Council.