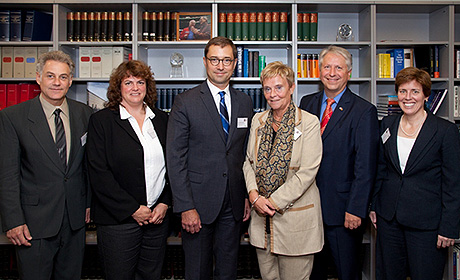 The second Research-Alumni Meeting took place in Boston, USA, in September 2012. One item on the agenda was to identify opportunities for a more intensive collaboration between Heidelberg University and North American universities. The meeting has already resulted in several new cooperation schemes, and more projects are in the planning stage: 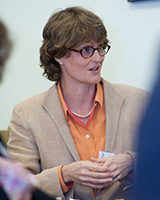 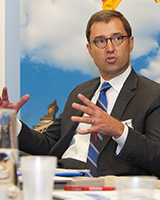 In the spring of 2013, a delegation of the University of Notre Dame from Notre Dame/Indiana came to Heidelberg University at the Rector’s invitation in order to discuss a partnership between the two universities. The cooperation will include an exchange programme for students and cooperative projects between individual disciplines. “The idea is to enable exchange on all levels, both for students – BA, MA and doctoral students – and for teaching staff”, explains Prof. Dr. Robert Norton, Associate Vice President for Internationalization in Notre Dame. “In particular, we would like our pre-med students – BA students who already know they want to study medicine and have to take specific preparatory courses – to be able to attend these courses in Heidelberg as well.” The first tangible result of the cooperation between both universities is an international conference scheduled for March 2014 to mark the 100th anniversary of the beginning of World War I. The conference is organised jointly by academics from Notre Dame and Heidelberg and will take place in London, in a building owned by the University of Notre Dame.

A number of attendees of the Boston meeting returned to Heidelberg for a research stay within the framework of the HAIreconnect programme. During their time there, they familiarised themselves with their tasks as Research-Alumni Ambassadors, i.e. relaying their experiences in their personal network and raising awareness among colleagues and junior researchers for the research and support programme offered by Heidelberg University: