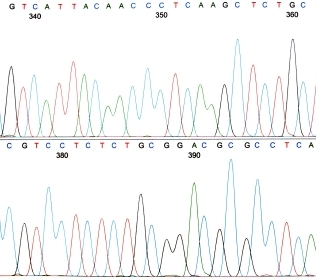 The developments in 1990 marked the beginning of a new phase in the exploration of the human genetic code (genome). The Human Genome Project (HGP) began its analysis of human DNA, continuing the work of the international Human Genome Organisation (HUGO). Ten years later, preliminary results were announced and in 2003, the full sequence of the human genome was completed (Collins, 2003). Sequencing the genome of a single individual was possible for the first time in 2007 (Venter PloS Biol 2007). Currently, the International Cancer Genome Consortium (ICGC) is working on fully describing the genome mutations in fifty different types of tumours. The international 1000-Genomes-Project also plans to sequence the genomes of 2500 people by the end of 2011 in order to create a catalogue of human genetic variations. Improvements in sequencing technology achieved through this process have reduced the cost of sequencing, allowing the technology to become more widely available. Private firms have since started to offer genomic profiles.


High resolution genome analyses have brought to light new aspects of the construction and function of genetic information. There has been shown to be significant variability between individuals’ genomes. This variability is apparent in the number of long DNA strands (so-called copy number variants, CNVs) as well as in the individual building blocks of the DNA sequence (single nucleotide polymorphism, SNPs). These variants are important in determining a person’s predisposition to a disease as well as the origin and severity of the disease. In addition to the proteins that carry genetic information, a group of several RNA molecules that regulates the flow of genetic information in a highly complex way was also identified. Environmental influences affect the retrievability of genetic information stored in the DNA by modifying the DNA itself or modifying the surrounding protein framework on the chromosomes, a regulatory level known as epigenetics. Disturbances of the epigenetic regulatory principles are, like mutations of the DNA, significant in the emergence of inherited or acquired diseases. However, the biological and medical implications of many aspects of the seemingly ever more complex genome still remain unclear.

In Heidelberg, the German Cancer Research Center (DKFZ) and the European Molecular Biology Laboratory (EMBL) are working in cooperation with the Heidelberg University Hospital on the sequencing of the whole human genome. The goal of this research is to find correlations between diseases and changes in the genome in order to further develop medical diagnostic and treatment techniques. Early treatment successes have already been achieved.