Podiumdiscussion on handing out raw genomic data to study participants.

Code of Conduct for Genome Sequencing.

EURAT as a reference point.

On ethical and legal issues in genomic Research.

The second, updated edition of the EURAT position paper is published also in English.

Comments on the Code

Dr. Mahr and Prof. Rehmann-Sutter discuss the EURAT-Code in a book chapter.

Members of the EURAT-group and other researchers register an absence of incidental findings in genomic research and discuss the consequences for the ethical debate.

Genomics will be one of the largest data producers - EURAT-members Prof. von Kalle and Prof. Eils comment this development.

At the frontiers of knowledge

Research and responsibility in conflict?

The anthology is published in the series "Nova Acta Leopoldina" and contains contributions from the EURAT-Symposium 2012.

A report in ZDF Heute Journal on which some members of the EURAT-group were involved is online available:

EURAT-Code at the University of Heidelberg

The Executive Board of the German Cancer Research Centre informed all employees about the validity of EURAT-Code.

The English version of the EURAT position paper is published.

Article on HIPO and EURAT

The "Deutsche Ärzteblatt" reported about the HIPO-Project and the EURAT-Project.

BioPro about the report recently published by EURAT.

Statement by the German Society of Human Genetics about additional genetic findings in diagnostics and research.

Report by the Berlin-Brandenburg Academy of Sciences about the consequences of new sequencing technology for genetic patient care:

PHG Foundation recommendations on the management of findings from the 100,000 Genomes Project:

Article by Bio-Pro referring to research of EURAT project member Dr. Jan Korbel about how

Article about data collection in the health system by the "Frankfurter Allgemeine Zeitung":

Lectures of the annual conference 2012 of the German Ethics Concil about personalized medicine and its consequences for patients.

The following website provides a survey about locations doing Next Generation Sequencing research:

How to handle incidental findings?

EURAT - Ethical and Legal Aspects of Next Generation Sequencing 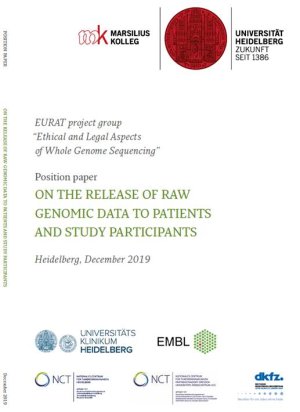 Link:Position paper on the release of raw genomic data to patients and study participants