The German-Japanese University Consortium HeKKSaGOn was founded in July 2010 as an association of three German and three Japanese universities. The rectors and presidents of Heidelberg University, Göttingen University and the Karlsruhe Institute of Technology and three of Japan’s leading universities – Kyoto, Osaka, and Tohoku – signed a joint declaration in Heidelberg in July 2010. At the HeKKSaGOn meeting in Kyoto at the end of March 2012, the participating universities also signed a joint statement that defined key areas of cooperation to further intensify this transnational collaboration. A third meeting of presidents and rectors of the HeKKSaGOn consortium will be held in Göttingen in September 2013. HeKKSaGOn stands for the Heidelberg – Kyoto – Karlsruhe – Sendai – Göttingen – Osaka – network.

The university partners in HeKKSaGOn share the conviction that important global problems can be solved only through interdisciplinary and international cooperation and through the open exchange of knowledge. To that end, they wish to simplify the exchange of information, expand cooperation in research and teaching, initiate graduate programmes, and promote the exchange of students, doctoral candidates, and researchers. The goal of the consortium, which is unique in German-Japanese cooperation, is to intensify scientific cooperation as well as ensure the sustainability of transnational initiatives and projects. HeKKSaGOn receives support from the Robert Bosch Foundation. 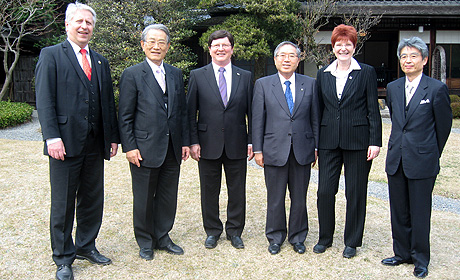 Working groups within the HeKKSaGOn partnership have been established in various forward-looking fields of research, such as the environmental, life and material sciences, the neurosciences and scientific computing as well as the social and cultural sciences. A number of promising joint research projects are in the offing, marked by greater mobility for research sojourns and visiting lectureships.

With the support of the Baden-Württemberg Foundation, Heidelberg University and the three Japanese partners are also setting up a doctoral exchange programme in order to cooperate even more closely in educating junior researchers. Doctoral candidates from Heidelberg are eligible for scholarship funding for three to ten months to study in Japan, and likewise, candidates from the universities in Kyoto, Osaka and Tohoku can receive funding for study at Heidelberg University.

The first joint summer school for consortium doctoral students was held in September of 2012 to open up new pathways of cross-disciplinary cooperation to talented young researchers. Renowned researchers from various disciplines shared how they forged beyond disciplinary boundaries and succeeded in building transdisciplinary networks to tackle research problems.

In September 2014, the second interdisciplinary HeKKSaGOn summer school for doctoral students was held. The topic of the event at the  Karlsruhe Institute of Technology was „Nanotechnology: Potential and Challenges“.