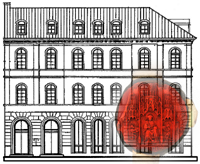 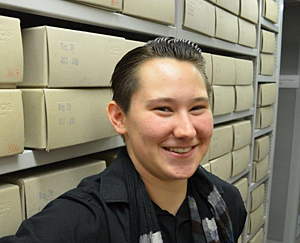 ​​Before I left my native land and ventured into the unknown European world, otherwise known as Heidelberg, Germany, I never imagined that one day soon I would be washing dust from my hands after handling files dating back to the twentieth century. While discussing what wonderful moments lay ahead for me in Heidelberg with a friend the subject of an archive internship came to the forefront of our conversation. As soon as I heard that my time in Heidelberg could be spent sifting through old files and researching the past my heart skipped a beat. As a student studying history and German I was presented with a unique internship opportunity during my time in Heidelberg. One that has broadened my perspective on German history profoundly.

The University Archive in Heidelberg is a historian’s treasure chest filled with gems of the past concerning the oldest university in Germany. Ruprecht-Karls-University Heidelberg was founded in 1386 and the archive of the university contains documents ranging from student files, personal documents of professors, folders of doctors’ notes and texts written by and concerning psychiatric patients of the past, magazines, matriculation books, objects, pictures, music, film clips and so much more, some of which even date back to the founding of the prestigious University. To the average person this large collection of diverse materials may sound jejune, but to those of us interested in history, we begin to drool at the very thought of such an archive. These documents are carefully preserved and maintained in order to assist both professional and personal research requests from historians, genealogists, and scholars, among others.

As a short term fall student through the AJY program I thought I would not be able to pursue my dream of working in an archive. However, the staff at both AJY and the archive were incredibly accommodating and granted me the wonderful gift of a short term internship. I was simply delighted and looked forward to a foray into archival science in order to improve both my German proficiency as well as my understanding of German history. In the archives I have learned a great deal about what goes into preserving documents—humidifiers and dehumidifiers are key features among others— and the systems that Heidelberg archivists use to organise these extensive collections. My duties have ranged considerably in the short but nonetheless fulfilling seven weeks spent working in the archives. I have read and responded to emails, processed requests, researched former students, watched a film clip, gazed at pictures, copied files, toured long forgotten basements and vaults with bricks dating back to the 1400s and vault doors from a former bank and I even emptied water out of a dehumidifier. I remember being told jokingly by one of the archive directors that I wouldn’t have to join a gym, my exercise would instead come from removing large boxes off of shelves and carrying stacks of files. History may be fascinating but it is also heavy and dusty! Though not all of my responsibilities may have been glamorous they gave me a unique perspective into German history.

The most exciting part of my archival journey was searching through the Studenten Akten (student files) and Belegblätter (course lists of former students) collections in order to pull files relevant to research queries. I, quite literally, held fragments of history in my hands and they left not only my hands marked with the dust of the past but my mind marked with the historical impressions of students, much like myself, who pursued academic enlightenment during the early to late twentieth century. Through these experiences I’ve learned that the history of the University encompasses bright faces peering out of identification photos—such was the case with Wolfgang Joho who donned a pipe, three piece suit, and bow tie for his photo— but that certain files also reflect a complicated and dark history. A history that, despite its difficulties and troublesome times, can be learned from nonetheless.

As a history and German double major I had learned a great deal already about my primary area of focus: German history dating from the 1800s to 1945. Naturally the Second World War and National Socialism were large parts of my fascination with the time period but all of my learning was primarily through lectures and books. Through this internship history became a hands on experience. From glancing through the student file of Joseph Goebbels to examining the stamps upon ex-matriculation forms of students who were barred from the University during 1933 due to their ties to the Communist political ideology, I found myself holding the significance of history in my hands and washing its dust and ink stains off my fingers. History was transformed for me and my ability to connect with original documents through my internship at the Heidelberg University archive has broadened my world view and added significantly to my German proficiency.

Though sitting in a serene and quiet basement surrounded by old documents while flipping through lists of student names or standing and copying old files may not be for every student, I highly recommend considering an internship at the University Archives. The staff treated me with great respect and always assisted me in my German skills when I found my vocabulary to be lacking. Speaking and reading German weekly with the staff or off of student files and writing emails greatly enhanced my goal to improve my language skills while connecting me to the history of the University I was attending. Though my hands may now be washed, the experiences and growth I gained in the archive still remain.