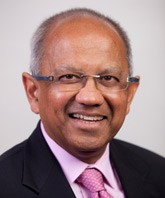 Sumit Ganguly is a Distinguished Professor of Political Science, and holds the Rabindranath Tagore Chair in Indian Cultures and Civilizations, at Indiana University, Bloomington. He is also a Senior Fellow at the Foreign Policy Research Institute, a member of the Council on Foreign Relations, and a Fellow of the American Academy of Arts and Sciences (elected 2017), and a recipient of the Humboldt Research Award (2017), to be hosted by the Department of Politics, SAI, Heidelberg University. A specialist on the contemporary politics of South Asia, Professor Ganguly’s research spans security, ethnic conflict, democratization, foreign policy, and international politics of that region. He is the author, co-author, editor, or co-editor of over 20 books on the region. His most recent books include The Oxford Handbook of India’s National Security (Oxford University Press, 2015, coedited with Nicolas Blarel and Manjeet S. Pardesi); Deadly Impasse: Indo-Pakistani Relations at the Dawn of a New Century (Cambridge University Press, 2016); and, with William R. Thompson, Ascending India and Its State Capacity (Yale University Press, 2017).