Santander International Winter School "What is Caesar's, what is God's?" 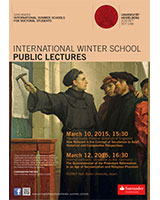 Prasenjit Duara, National University of Singapore:  "How Relevant is the Concept of Secularism to Asia? Historical and Comparative Perspectives"
On the basis of his recent work, Prasenjit Duara explores the relevance of the history and contemporary significance of the conception of secularism, particularly as it derives from the Protestant revolution in the West. By examining Charles Taylor’s impressive study (A Secular Age), Duara seeks to situate Taylor’s analysis in relation to the modern history of large Asian societies, especially China.
By exploring the different histories of the imported concept of secularism in China, India and Japan, it will be shown 1) secularism is accompanied by an equally important although much more obscured modern Western development, namely, the confessionalization of religion (the ‘chosen people’ under one God and state); 2) the confessionalismsecularism syndrome is closely tied to competitive modernizing nationalism in the world; and 3) while the Western concept of secularism may be of limited relevance to these Asian societies, the problem of confessional identities is growing in power in Asia and it must be addressed by a combination of modern and historical resources from these societies.

Hartmut Lehmann, Universität zu Kiel (Germany):
"The Quincentennial of the Protestant Reformation in an Age of Secularization and Religious Pluralism"
In the last days of October 1517 Martin Luther, Augustinian monk and professor of biblical theology at the university of Wittenberg, finished a series of theological theses in which he argued that selling indulgences is theologically wrong, in fact untenable. He attached these theses, 95 in all, to letters that he adressed to his ecclesiastical superiors. He asked them to stop the misuse so that the soals of pious believers should be protected. Protestants around the world consider Luther’s initiative as the beginning of the Reformation.
How should we celebrate the memory of these events which took place 500 years ago? Who should celebrate, the German Lutherans or Lutherans around the world? Where should one celebrate, in Luther’s Wittenberg or in Lutheran congregations on all continents? What should be the role of other Protestant denominations? Should Catholics be asked to participate? Furthermore: Considering the large number of victims of the religious wars of the following century, should one celebrate at all? Finally: What is the lasting value of Luther’s message in our time, in an age of secularization and religious pluralism?

These lectures are part of Heidelberg University’s »Santander International Winter School for Doctoral Students« at Kyoto University from March 9 to 18, 2015 on the issue »What Is Caesar’s, What Is God’s? A Transcultural Perspective on the Legitimation of the Political and Religious Spheres«.