A Volcanic Binge And Its Frosty Hangover

Press Release No. 22/2019
20 February 2019
German-Mexican research team discover large igneous province which could have triggered an early glaciation of Earth 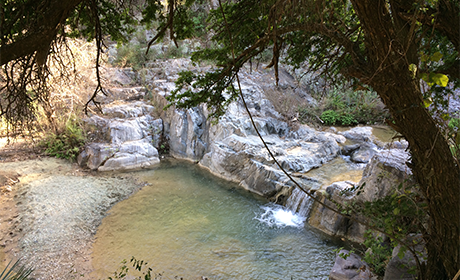 A major volcanic event could have triggered one of the largest glaciations in Earth's history – the Gaskiers glaciation, which turned the Earth into a giant snowball approximately 580 million years ago. Researchers from Heidelberg University and colleagues from Mexico have discovered remnants of such a large igneous province that resulted from vast lava flows. At the time, it extended over three continents, which today comprises the Earth's crust in parts of Mexico, North America, and northern Europe. The basaltic eruptions must have covered an area of at least a thousand kilometres in diameter. The results of the research were published in the journal “Geophysical Research Letters”.

Volcanism is a natural process that releases the greenhouse gas carbon dioxide (CO2) into the atmosphere. Weathering of silicate rocks on Earth’s surface traps atmospheric CO2 and sequesters it in carbonate rocks. “That guarantees long-term stability of Earth’s temperate surface conditions in comparison to the hostile environment of its cosmic neighbours, hot Venus and cold Mars,” explains Prof. Dr Axel K. Schmitt of the Institute of Earth Sciences at Heidelberg University. Disturbances of this equilibrium, however, are known to have occurred throughout Earth’s history. “At the end of the Proterozoic Eon, there were three worldwide glaciations. From space, the Earth would have resembled a snowball,” adds the geoscientist.

Extreme volcanic outpourings resulting in so-called large igneous provinces could be responsible for these Snowball Earth global glaciations. When continental land masses break up, it causes a volcanic binge that also releases massive amounts of CO2 into the atmosphere, which can cause short-term global warming. Then, however, the lava rock begins to weather. “The weathering process is especially intense at tropical latitudes. Over timescales of millions to tens of millions of years, the weathered rocks can sequester sufficient carbon dioxide to plunge Earth’s climate into an extreme ice age,” explains Prof. Schmitt. 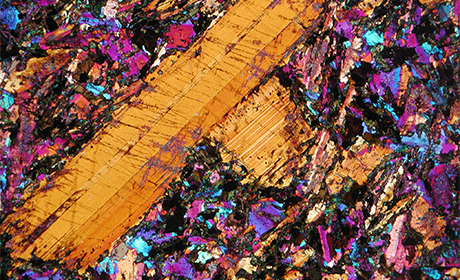 Photomicrograph of basaltic dyke rock in a thin section. The rock consists mainly of calcic feldspar. The image width is five millimetres.

The German-Mexican team which included researchers from the Centro de Investigación Científica y de Educación Superior de Ensenda (CICESE) studied basaltic dike rocks from the Novillo Gneiss in the Mexican state of Tamaulipas. These dikes are the roots of lava flows that have been long eroded. The research team demonstrated that dike rocks from Mexico are indistinguishable in their trace element and isotopic compositions to dated rocks from Canada and Norway. Moreover, the Heidelberg team was successful in retrieving microscopic mineral grains of baddeleyite from the Mexican samples.

Baddeleyite exclusively crystallises in magma and thus is a reliable indicator for the timing of volcanism. In this case, with the help of a high spatial resolution ion microprobe at the Institute of Earth Sciences, the rare mineral was determined to be 619 million years old. According to Prof. Schmitt, this date perfectly matches the time when the rocks found in Canada and Norway were formed. The researchers speculate that the long-term climate effects of this large igneous province led to the Gaskiers glaciation approximately 40 million years later.