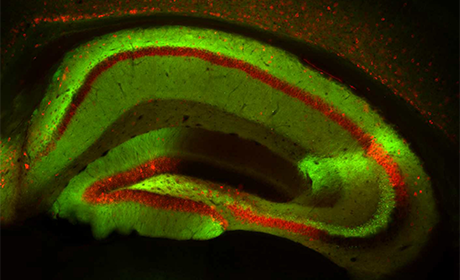 Neuroprotective role of APPsα: A histological section through the hippocampus is depicted in the background. The red staining shows APPsα in neuronal cell bodies. The green staining shows the dendritic processes of nerve cells.

A cleavage product of the Alzheimer's APP protein stimulates nerve cell communication and memory. The protein fragment, known as APPsα, has neuroprotective properties and acts as a signal molecule on other nerve cells. But how does it influence brain functions? An international research team led by Prof. Dr Ulrike Müller of Heidelberg University has gained new insights into the molecular mechanism underlying its physiological functions. The researchers discovered a receptor for APPsα, which paves the way for new treatment approaches for Alzheimer's.

Alzheimer's disease (AD) is triggered by insoluble protein aggregates that are found as extracellular deposits in the brain of patients suffering from AD. The main component is the β-amyloid peptide (Aβ), which damages and eventually kills the nerve cells. This small peptide is a cleavage product of a substantially larger precursor protein, the amyloid precursor protein (APP). Alzheimer's was long assumed to be caused mainly by the overproduction of the β-amyloid peptide. "New studies show, however, that APPsα levels drop over the course of the disease. APPsα functions as an antagonist to the damaging Aβ," explains Prof. Müller. "In Alzheimer's, there is a misregulation in APP cleavage whereby too little APPsα is produced."

To find out how the neuroprotective APPsα affects brain functions, the soluble protein fragment APPsα was introduced via viral "vectors" into the hippocampus of genetically modified mice. The hippocampus is a brain region that is considered as crucial for memory formation. The researchers were able to demonstrate that APPsα increases the number of synaptic contacts between nerve cells. "This was associated with more efficient nerve cell communication and improved memory in learning tests," states Ulrike Müller, professor of functional genomics at the Institute for Pharmacy and Molecular Biotechnology of Heidelberg University.

Further electrophysiological experiments revealed that APPsα acts as a signaling molecule on the synaptic contacts of certain nerve cells. These synaptic contacts use the neurotransmitter acetylcholine, which is one of the most important messenger molecules for transmitting signals between nerve cells. The protein fragment APPsα enhances signal transmission by acetylcholine receptors and increases their natural receptivity. This is the first time that researchers have identified a receptor for APPsα in an animal model. "This paves the way for new options in Alzheimer's research, such as increasing the amount of APPsα in the brain," states Prof. Müller.