The non-public ceremony will begin at 6 p.m. in the Great Hall of the Old University. Media representatives are welcome to cover the event. To register, please e-mail presse@rektorat.uni-heidelberg.de. 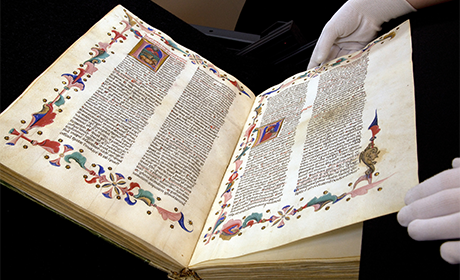 After centuries of separation, one of the most valuable collections of manuscripts from the Middle Ages and Early Modern Age – the Bibliotheca Palatina – has been virtually reunited. Heidelberg University Library digitised not only the German manuscripts in its own holdings but also the Latin codices of this "mother of all libraries", housed in Rome for nearly 400 years within the walls of the Vatican Library, the Biblioteca Apostolica Vaticana. The Manfred Lautenschläger Foundation provided the long-term financing that made possible this landmark project in scholarly research. A ceremony will be held on 15 February 2018 at Heidelberg University to commemorate the completion of the digitisation. Sponsor and Honorary Senator of Ruperto Carola, Dr. h.c. Manfred Lautenschläger, will participate.

The Bibliotheca Palatina had a long history even before Pope Gregory XV confiscated it in the Thirty Years' War and transferred it to the Vatican in 1623. For nearly 250 years, it had grown from two sources – the royal collections of the Heidelberg Castle and the libraries of Heidelberg University founded in 1386. With the exception of the German-language codices, which were permitted to return to Heidelberg in 1816, the Palatina remains a foundation of the Vatican Library in Rome. At the beginning of the 17th century, it was known as “the greatest treasure of Germany's learned”. As a universal library, it contains not only theological, philological, philosophical, and historical works but also medical, natural history, and astronomical texts. It therefore remains of great interest for a number of academic disciplines. The digitised core inventory of approximately 3,000 manuscripts is now available to everyone over the Internet.

The President of Ruperto Carola will open the ceremony to mark the virtual reunification of the Bibliotheca Palatina. The Director of the University Library will then provide some insight into the project's academic policy and organisational framework. Prof. Dr Christopher Young of the University of Cambridge will deliver the keynote address. Using the example of the “Kaiserchronik”, the first large-scale German-language chronicles from the mid 12th century, Prof. Young will discuss the new opportunities that the digital presentation of mediaeval manuscripts offers research. Finally Dr. h.c. Manfred Lautenschläger talks about “Der Stifter als Anstifter”. 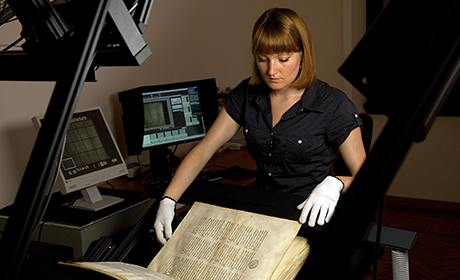 An employee of the University Library digitises a medieval manuscript at the Graz book table in Rome.
Editor: Email
Latest Revision: 2018-02-13