Find of Human Bones in South Mexico: Stalagmite Reveals Their Age as 13,000 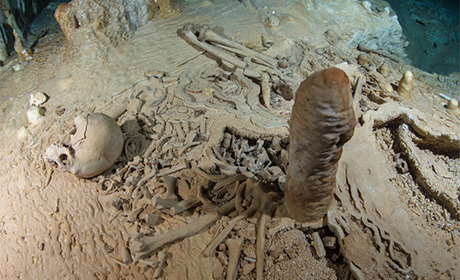 Prehistoric human skeleton in the Chan Hol Cave near Tulúm on the Yucatán peninsula prior to looting by unknown cave divers.

A prehistoric human skeleton found on the Yucatán Peninsula is at least 13,000 years old and most likely dates from a glacial period at the end of the most recent ice age, the late Pleistocene. A German-Mexican team of researchers led by Prof. Dr Wolfgang Stinnesbeck and Arturo González González has now dated the fossil skeleton based on a stalagmite that grew on the hip bone. “The bones from the Chan Hol Cave near the city of Tulúm discovered five years ago represent one of the oldest finds of human bones on the American continent and are evidence of an unexpectedly early settlement in Southern Mexico,” says Prof. Stinnesbeck, who is an earth scientist at Heidelberg University. The research findings have now been published in PLOS ONE.

The early settlement of the Americas is a subject of controversial debate. A longstanding hypothesis claimed that the first migration took place 12,600 years ago through an ice-free corridor between retreating North American glaciers, via the ice-age Bering Land Bridge between Siberia and Alaska. In recent years, however, this theory is being increasingly called into question by new finds from North and South America. They indicate that people arrived there earlier, explains Prof. Stinnesbeck. However, these finds were mostly artifacts or open hearths, their age being dated by using the sediment they contained. It has been extremely rare so far to find human bones older than 10,000 anywhere in the Americas.

The water-filled caves near Tulúm on Yucatán – a peninsula separating the Gulf of Mexico from the Caribbean Sea – offer a rich area for finds. Seven prehistoric human skeletons have already been documented in the intricate cave system near the coast in the eastern part of the peninsula, some of them previously dated by other researchers. The caves along Yucatán’s Caribbean coast were not flooded until the worldwide rise in sea level after the ice age. They contain archaeological, palaeontological and climatic information hidden there from the time before the flooding, which is extremely well preserved, according to Wolfgang Stinnesbeck.

It was, however, difficult to exactly determine the age of the human skeletal material using conventional radiocarbon dating, because the collagen in the bones had been completely washed out due to the long period spent in water. Prof. Stinnesbeck and his German-Mexican team of earth scientists and archaeologists therefore chose another method. By dating a stalagmite that had grown on the hip bone, they were able to narrow down the age of the human bones from the Chan Hol Cave.

The analysis of the uranium-thorium isotopes gave the skeleton a minimum age of 11,300 years. However, the climatic and precipitation data stored in the stalagmite showed a clearly higher age. It is measurable in terms of oxygen and carbon isotope ratios and was compared to “environmental archive” data from other parts of the earth. Aged at least 13,000, the Chan Hol Cave inhabitant presumably dates from the Younger Dryas. “It represents one of the oldest human skeletons from America. Our data underline the great importance of the Tulúm cave finds for the debate about the settling of the continent,” says Prof. Stinnesbeck.

According to the Heidelberg earth scientist, the enormous urbanisation and growth of tourism in this region threaten the palaeontological and archaeological archives preserved in the caves. Shortly after the discovery of the human skeleton in February 2012 the site of the find was looted; unknown divers stole all the bones lying around on the ground of the cave. Only a few photos and small fragments of bones bear witness today to the original find situation. The hip bone investigated by the German-Mexican researcher team only escaped being stolen through the protection provided by the rock-hard lime-sinter of the stalagmite.