Press Release No. 115/2017
21 August 2017
The discovery of numerous ultra-diffuse galaxies is both remarkable and puzzling 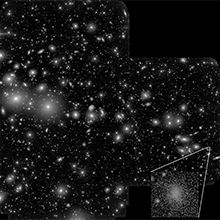 The central region of the Perseus galaxy cluster. The mosaic image is composed of many "tiles" of long-exposure images taken with the 4.2 metre William Herschel Telescope on the island of La Palma. Ultra-diffuse galaxies are difficult to spot, as the enlargement shows. The diameter of the whole image area is about that of the full moon on the sky background.

Very large yet faint galaxies have been found where no one would have expected them – in the middle of a giant galaxy cluster. Heidelberg astronomers discovered the extremely-low-density galaxies, known as ultra-diffuse galaxies, a find that is "both remarkable and puzzling", states Dr Thorsten Lisker. The research work was carried out by Carolin Wittmann in Dr Lisker’s team at the Centre for Astronomy of Heidelberg University (ZAH). The results have been published in the “Monthly Notices of the Royal Astronomical Society”.

Our solar system is located amid an enormous galaxy composed of billions of stars, the Milky Way. About 3,000 stars can be seen with the naked eye. However, if Earth were located in an ultra-diffuse galaxy, only a few dozen stars and a "trace" of a galaxy would be visible in the night sky. These special classes of galaxy, so named for their extremely diffuse appearance, apparently produced far fewer stars than other galaxies or else were stripped of them long ago by galactic tidal forces.

Astronomers began to systematically search the universe for such ultra-diffuse galaxies just three years ago. Aided by large telescopes and new technologies, they found them, especially in large galaxy clusters. Much to their surprise, the Heidelberg researchers identified about 90 such galaxies in the core of the Perseus galaxy cluster. The Perseus cluster is a dense collection of hundreds of large and small galaxies located 240 million light years away. Amazingly, most of the ultra-diffuse galaxies appear intact, with only very few candidates showing signs of ongoing disruption in spite of the strong tidal field.

"We asked ourselves how the sensitive ultra-diffuse galaxies could survive at all in an environment as unsettled as a galaxy cluster," explains Carolin Wittmann, first author of the study and PhD student at the Institute for Astronomical Computing (ARI) at the ZAH. "Perhaps the stars in ultra-diffuse galaxies are gravitationally bound due to an especially high dark matter content." That would make sense, according to the researcher, since virtually no signs of interactions with larger galaxies were found.

The Heidelberg research was based on long-exposure images of the Perseus galaxy cluster obtained in 2012 with the 4.2 metre William Herschel Telescope on the Canary Island of La Palma. "We originally wanted to study the effects of tidal forces on small known galaxies and any attending structural disruptions. But the quality of the data was so exceptional that we were able to find numerous ultra-diffuse galaxies," underscores Dr Lisker, project initiator and coordinator.

Along with international partners, his research group is now hoping to obtain data of similar quality on the outskirts of the Perseus cluster, where, Thorsten Lisker adds, the environmental influence would have been less strong, preserving more of the original appearance of the galaxies.