Press Release No. 85/2017
14 June 2017
Scientists from Heidelberg and Chicago use optogenetics and mathematical modelling to identify a central molecule in cell mechanics 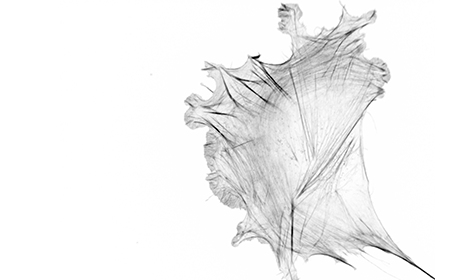 Microscopic image of muscle-like structures in a non-muscle cell. They can be specifically targeted using optogenetic methods.

Not only muscle cells, but also all other cell types continually generate forces in the human body. An interdisciplinary cooperation of biologists and physicists including Heidelberg researcher Prof. Dr Ulrich Schwarz now succeeded in performing high-resolution measurements of cell forces using light to switch them on and off in a controlled manner. The scientists from the universities of Heidelberg and Chicago (USA) used optogenetics and mathematical modelling to identify a central molecule in cellular mechanics. The results of this research were published in the journal “Nature Communications”.

Muscle cells, which contract in response to an external signal, are needed to pump blood through the body or to move body parts. Yet also all other cell types in our body continually generate forces, aided by muscle-like structures present in every human cell. Cells use these forces to sense mechanical changes in their environment, which plays an important role for example in wound healing. The cellular muscles are also activated during cell division and cell movement.

Ulrich Schwarz, a researcher at the BioQuant Centre as well as at the Institute for Theoretical Physics of Heidelberg University, has been working on measuring cellular forces for some time. “The role of mechanical forces in the behaviour of biological cells has long been overlooked, but then has become a rapidly growing field of research over the last two decades now known as mechanobiology,” states Prof. Schwarz. His research group is developing computer algorithms to calculate cell forces from the deformations they generate in their environment. Based on this information, mathematical models for cell mechanics are generated.

“To achieve high precision in measuring cell-generated forces, the cells have to be studied on a flat surface. Even then, however, forces cannot be generated in as controlled a manner as in the human body,” explains Prof. Schwarz. The experimental research groups of Prof. Dr Michael Glotzer and Prof. Dr Margaret Gardel of Chicago were able to help. They developed a new optogenetic method for controlling cell forces with light. Prof. Schwarz and three members of his research group then succeeded in analysing the data from Chicago using custom-made algorithms.

Their mathematical evaluation led the researchers to a surprising discovery. “We studied the role of different molecules in force generation and transmission and discovered that a certain repair protein called zyxin is essential for these processes,” continues Prof. Schwarz. “This suggests that the cell continuously induces mechanical rupture of itself, much like a zipper opening under force. Only through constant repair can the cell retain the elastic properties that are so important for its function.”