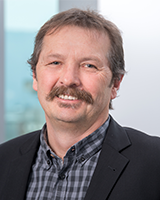 The European Research Council (ERC) has awarded biochemist Prof. Dr Ed Hurt a highly endowed ERC Advanced Grant for outstanding research leaders in Europe. The project on the biogenesis of ribosomes will be funded for a period of five years. The researchers in Prof. Hurt's team want to study the largely unexplored processes that take place in the initial phase of the manufacture of these cellular protein factories. The results of the research could contribute to a greater understanding of ribosomopathies – diseases caused by impaired ribosome biogenesis. The research, which is scheduled to begin in 2018, will receive ERC funding of approximately two million euros. Ed Hurt teaches and conducts research at the Heidelberg University Biochemistry Center (BZH).

In the funded project, entitled “Encapsulated Eukaryotic Ribosome Assembly”, Prof. Hurt and his team will study the earliest known ribosomal precursor, the 90S pre-ribosome. Their previous research already demonstrated that the smaller of the two subunits that make up a ribosome is enclosed by a kind of shell during its biogenesis to allow seamless and targeted assembly of the protein factories. The Heidelberg research results suggest an innovative concept in RNA biology, namely that the newly produced ribosomal RNA folds and matures in a protected environment. Now the researchers hope to discover how the 90S pre-ribosome temporarily encapsulates the RNA to protect it from undesirable interactions. Also of interest is how the small ribosomal subunit "emerges" from this cast in a cascade of harmoniously coordinated reactions in order to produce a functioning ribosome. These insights into the mechanisms of the ribosomal "delivery room" should improve our understanding of how this multifaceted development process relates to other important cellular processes and to the development of diseases such as cancer.

Ed Hurt (b. 1955) studied biology and chemistry at Regensburg University, earning his doctorate there in 1983. He pursued postdoctoral research at the Biozentrum of the University of Basel in Switzerland before joining the European Molecular Biology Laboratory (EMBL) in Heidelberg in 1987 as a research group leader. He completed his habilitation in 1990. The researcher was appointed a professor of biochemistry at Heidelberg University in 1995. He served as Director of the BZH from 2003 to 2005. Prof. Hurt has received numerous awards for his groundbreaking contributions to the understanding of molecular processes in cells, including the 2001 Leibniz Prize from the German Research Foundation, the most highly endowed research prize in Germany.