Progress Towards a Circuit Diagram of the Brain 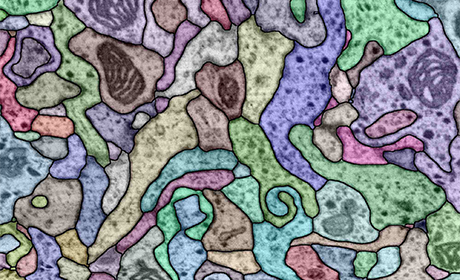 The illustration shows a minute fraction of a fly brain. The automated analysis partitions a three-dimensional image stack into individual nerve cells, depicted here with arbitrary colours. Twenty of such images side by side approximate the diameter of a human hair.

Precise knowledge of the connections in the brain – the links between all the nerve cells – is a prerequisite for better understanding this most complex of organs. Researchers from Heidelberg University have now developed a new algorithm – a computational procedure – that can extract this connectivity pattern with far greater precision than previously possible from microscopic images of the brain. Prof. Dr Fred Hamprecht, head of the "Image Analysis and Learning" working group at the Interdisciplinary Center for Scientific Computing, expects such automated image data analysis to bring about great strides in the neurosciences. It will likely lead to a circuit diagram of the brain.

Understanding how the brain works is one of science's greatest mysteries. "Except for a simple roundworm, there is still no circuit diagram of a complete animal brain, let alone a human brain," states Prof. Hamprecht. In recent years, imaging techniques have been developed that can finally produce three-dimensional images of the entire brain at a sufficiently high resolution. These images are so big, however, that manual analysis would take centuries. What is needed, therefore, is an automated analysis process with the lowest possible error rate.

The new algorithm leverages non-local image information, allowing the researchers to study non-adjacent regions of the image and deduce whether they belong to the same nerve cell. Dr Björn Andres of the Max Planck Institute for Informatics in Saarbrücken has demonstrated how short and long-range interactions can be considered jointly. The aim is to find an optimal solution that does justice to both types of image information in the best way possible. "This approach affords far lower error rates than all known methods," states Prof. Hamprecht.

Research groups around the world have joined in competitions to measure the accuracy of their automated analysis pipelines. The aim is to partition a three-dimensional image into the nerve cells it contains. A labour-intensive manual process is used beforehand to determine the correct partitioning, which is kept secret. All submissions are then compared to the diagram and the approach with the lowest error rate wins. In the latest partitioning challenge, the CREMI Challenge on Circuit Reconstruction from Electron Microscopy Images, the researchers at the Interdisciplinary Center for Scientific Computing succeeded in producing the most accurate analysis by a large margin.

To explain the challenge of using this analysis method to produce a circuit diagram of a brain, Prof. Hamprecht resorts to the fly as an example. The fly is capable of astonishing feats: It finds food, shelter and mates in a complex and often hostile environment. "Although its brain is smaller than the head of a pin, the diagram of its neuronal connections remains elusive." The Heidelberg team is using their new algorithm to map the brain circuit of the fly first before moving on to higher animals, according to mathematician Dr Anna Kreshuk.

In the past fifteen years, the "Image Analysis and Learning" working group has been developing machine learning algorithms for computer vision, with applications mostly in the life sciences but also industry. The latest research results, achieved in a close international cooperation, were published in the journal "Nature Methods".