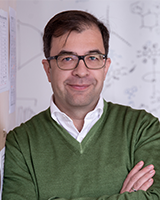 Heidelberg chemist Prof. Dr Michael Mastalerz is receiving a highly endowed ERC Consolidator Grant for outstanding young researchers from the European Research Council (ERC). The grant will be used to fund a five-year project in which the scientist and his team will be working on the targeted synthesis of soluble, porous materials. The researchers plan to use an innovative synthesis approach to achieve organic cage molecules, which are interesting for use in sensor applications, among others. The research work, which is scheduled to begin in April 2017, will receive ERC funding totalling nearly two million euros. Prof. Mastalerz teaches and conducts research at the Institute of Organic Chemistry of Heidelberg University.

In the project entitled "CaTs n DOCs – Chemically and Thermally stable nano-sized Discrete Organic Cages", Prof. Mastalerz and his team will investigate porous materials whose large inner surfaces make them promising for diverse applications, such as separation and storage of compounds or catalysis. Typical materials of this type include three-dimensional networks such as inorganic zeolite and activated carbon as well as the so-called metal-organic frameworks, all of which represent insoluble materials. The research group under the direction of Prof. Mastalerz will be working primarily with geometrically defined and shape-persistent organic cage molecules. Unlike zeolite and activated carbon, these defined nano-sized molecules are soluble in other compounds, thus rendering them soluble porous units that can be processed. Targeted synthesis makes it possible to adjust them in form and function for various applications. The challenge, however, is that several of these cage molecules are less stable chemically, a problem that the Heidelberg researchers intend to solve using a new conceptual synthesis approach.

After successfully completing his training as a laboratory chemist, Michael Mastalerz studied chemistry in Duisburg, earning his doctorate in 2005 at Ruhr University Bochum. After a brief stint in industry, he joined the Massachusetts Institute of Technology in Cambridge (USA) as a postdoc in 2006, transferring to Ulm University in 2007, where he completed his habilitation in 2013. That same year, he was appointed professor of organic chemistry at Heidelberg University.

The ERC Consolidator Grant is given to excellent young researchers whose own independent working group is in the consolidation phase. Scientific excellence is the main criterion.