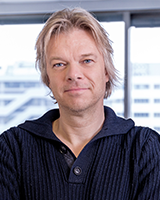 Assistant Professor Dr Frank Postberg, a Heidelberg University researcher, is receiving a highly endowed ERC Consolidator Grant for excellent young researchers from the European Research Council (ERC). The funding will be used to finance Dr Postberg's work for a period of five years, during which he will attempt to determine whether life is possible in the oceans under the surfaces of the icy moons of Jupiter and Saturn. Data from the Cassini-Huygens space probe will be amongst others analysed to determine their habitability. The ERC is providing approx. two million euros in funding. Frank Postberg heads the Planetary Science by Space Missions research group at Heidelberg University's Institute of Earth Sciences.

In the ERC-funded project, "Habitat-OASIS – Habitability of Oceans and Aqueous Systems on Icy Satellites," Dr Postberg and his team will study mainly the icy moons of Enceladus (Saturn) and Europa (Jupiter). According to the scientist, those locations probably have the highest astrobiological potential in our solar system. Putative hydrothermal activity on the floor of those oceans may offer favourable conditions for life to emerge. "Enceladus and presumably Europa expel massive jets of material from their respective interiors, material that we can study with space probes," explains Dr Postberg. Data from the Cassini-Huygens probe will be analysed using innovative laboratory-based methods to determine the geochemical properties of Enceladus. The researchers hope to draw conclusions on how hospitable a mighty ocean under an ice shield in the moon's interior might be.

Further research will be carried out in an international project with the Laboratory of Planetology and Geodynamics in Nantes (France). The researchers will create geophysical models of the evolution of the interiors of Jupiter's and Saturn's ocean moons over hundreds of millions of years. In conjunction with geochemical experiments, they hope to simulate conditions on the floor of the extraterrestrial oceans. The findings will also help in planning future space missions to the icy moons of Jupiter to investigate the habitability of the oceans there.

Frank Postberg studied chemical technology and physics, with an emphasis on astronomy, in Darmstadt. He began his doctoral dissertation at the Max Planck Institute for Nuclear Physics in Heidelberg; he was awarded his doctorate in 2007 at the Faculty for Physics and Astronomy at Ruperto Carola. Dr Postberg initially remained in Heidelberg to conduct postdoctoral research, then continued on to the Institute of Space Systems at the University of Stuttgart and the Laboratory for Atmospheric and Space Physics of the University of Colorado in Boulder (USA). He habilitated in 2012 at Heidelberg University in the field of cosmochemistry. Frank Postberg has been a Heisenberg Fellow since 2014 with support from the German Research Foundation and is a research group leader at the Institute of Earth Sciences since 2016.

The ERC Consolidator Grant is given to promising young researchers whose own independent working group is in the consolidation phase. Scientific excellence is the main criterion.