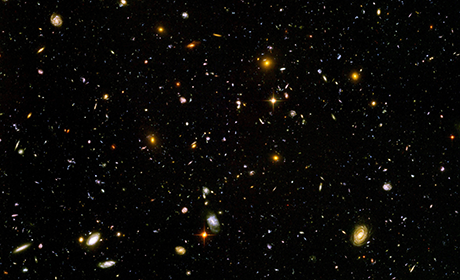 The so-called "Hubble Deep Field", an extremely long exposure by the Hubble Space Telescope. The image almost exclusively contains galaxies whose light began travelling in our direction shortly after the Big Bang. Dr. Kruijssen's research funded by the ERC Starting Grant is aimed at understanding how these galaxies formed their stars and how this process affected their further evolution.

Heidelberg astrophysicist Dr Diederik Kruijssen is receiving an ERC Starting Grant for excellent young researchers from the European Research Council (ERC). The five-year grant will cover a project in which the researcher will investigate the physics of star formation in galaxies across cosmic time. The ERC funding totals approx. 1.5 million euros. Since earlier this year, Dr Kruijssen is leading an Emmy Noether Group at the Institute for Astronomical Computing at the Centre for Astronomy of Heidelberg University (ZAH). The ERC project is scheduled to start in April 2017. 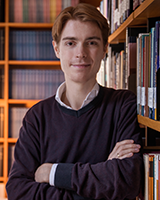 The “Multi-Scale Star Formation Across Nascent Galaxies” (MUSTANG) project that has now been funded by the European Research Council will focus on star formation in interstellar gas clouds. Dr Kruijssen and his team have developed a new mathematical method that allows them to analyse observational images of galaxies to measure how quickly interstellar gas clouds collapse to form stars and how the young stars then blow out the remaining gas. As the astrophysicist points out this method is ideally suited for applications with modern telescopes. The results from the observations will then be fed into computer simulations of galaxy formation. “Until now, science has been unable to definitively explain why galaxies come in such a wide variety of sizes and shapes,” says Dr Kruijssen. “Simulations currently cannot reproduce this variety, because the sizes and shapes of galaxies depend strongly on the unknown physics of star formation.” The new observations will finally enable the researchers to integrate a realistic description of star formation into their computer simulations, which will allow them to explain the formation history and properties of galaxies like our Milky Way. Funding from the ERC Grant expands the work of Dr Kruijssen's Emmy Noether Group, which already has funding of 1.2 million euros from the German Research Foundation (DFG).

Diederik Kruijssen conducted research at the universities of Utrecht, Leiden, and Cambridge as a Toptalent Fellow of the Netherlands Organisation for Scientific Research (NWO). In 2011, he received his PhD in astrophysics from Utrecht University. His PhD research was awarded the Christiaan Huygens Prize of the Royal Netherlands Academy of Arts and Sciences. Thereafter, Dr Kruijssen worked as a postdoctoral research fellow at the Max Planck Institute for Astrophysics in Garching near Munich. In summer 2015, he joined the Institute for Astronomical Computing of Heidelberg University as a new research group leader and the new Gliese Fellow, which is a ZAH grant for excellent postdocs in the field of astronomy and astrophysics.

The European Research Council awards the Starting Grant to outstanding young researchers. Funding is awarded based on their scientific excellence and the innovative potential of their research ideas.