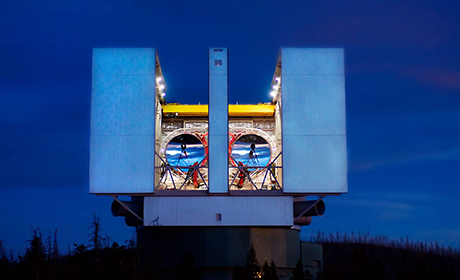 The Large Binocular Telescope with its two 8.4 metres mirrors in the open enclosure. The enclosure is about 60 m high and can be rotated freely.

After a ten-year design and construction period, a new universal device for astronomical observation at the world’s largest single telescope, the Large Binocular Telescope in Arizona (USA) has been finalised and tested successfully. The highly complex instrument named LUCI allows astronomers to record images and spectra in the infrared with outstanding quality. It was developed by researchers of the Centre for Astronomy of Heidelberg University (ZAH) in cooperation with colleagues from the Max Planck Institute for Astronomy in Heidelberg and the Max Planck Institute for Extraterrestrial Physics in Garching. The measuring system will undergo further calibrations in the coming weeks. Once they are complete, LUCI will be available to astronomers for regular observation activities. Researchers hope that the data collected with the new instrument will give them an insight into the “nursery” of stars and even allow them to observe planets that circle remote suns.

Located at an altitude of 3,200 metres on Mount Graham in Arizona, the Large Binocular Telescope (LBT) is equipped with two mirrors of 8.4 metres diameter attached to a single mount. The LBT has the light-collecting power of a twelve-metre telescope, making it the largest single telescope in the world. To tap its full potential, astrophysicists and engineers are developing special measuring instruments, one of which is LUCI; the abbreviation stands for “Large Binocular Telescope Near-infrared Utility with Camera and Integral Field”. The universal device can take infrared pictures of a sky region and break up the light emitted by individual objects into its spectral components, as Dr Walter Seifert explains. The scientist at the State Observatory Königstuhl, which belongs to the ZAH, was involved in LUCI’s development from the very start.

Researchers assumed that the LBT would be able to provide much sharper images than the Hubble space telescope. However, for a long time that was not the case, as turbulences in the earth’s atmosphere – the same ones that make the stars appear to “twinkle” – blur images of stars and galaxies to a considerable extent. A new technology with a secondary mirror, known as adaptive optics, makes it possible to compensate for this effect at the Large Binocular Telescope. Five years ago the LBT delivered the first super-sharp images with a test camera. Now this quality can also be achieved with the complex measuring system LUCI, even though the light emanating from the objects must pass numerous lenses and mirrors before the detector registers the cosmic signal. The entire optic assembly is housed in a so-called cryostat which cools LUCI’s components to minus 200 degrees Celsius. “This is a necessary step to prevent undesired infrared heat radiation from LUCI’s components that would otherwise outshine the extremely weak infrared light of the observed astronomical objects,” explains Prof. Dr Jochen Heidt of the State Observatory Königstuhl.

The Heidelberg astronomer carried out the most recent test observations which, in his words, delivered “fantastic results”. According to the tests, the optical components are perfectly designed and adjusted. “They definitely deliver better results in the infrared range than Hubble,” underlines Prof. Heidt. LUCI consists of two special cameras that are used for infrared direct images of the sky and for spectroscopic examinations of astronomical objects. A third camera designed to take particularly sharp pictures is now deployed for the first time in combination with the LBT’s adaptive secondary mirror. It uses the telescope’s full optical resolution. A particularly striking feature of LUCI, according to Prof. Heidt, are the ten fixed and up to 23 exchangeable masks that are used for long-slit and multi-object spectroscopy. This technology, which was developed at the Max Planck Institute for Extraterrestrial Physics, allows astronomers to observe up to two dozen objects at a time. Even with very low working temperatures, the masks can be exchanged without the entire instrument being subjected to a prolonged heating-up and cooling-down phase.

Once the final calibrations are complete, one of LUCI’s applications will be the observation of remote galaxies whose light is in the infrared part of the spectrum due to the cosmic redshift. Researchers also expect LUCI to give them a glimpse of the birthplaces of stars – regions of space that are hidden by intergalactic dust which is transparent only to infrared light. In addition, they hope to gain new insights into the formation of planets that orbit distant stars. LUCI’s development and construction was a joint undertaking of experts from the State Observatory Königstuhl, the two Max Planck Institutes and additional partners. The latter are scientists from the Mannheim University of Applied Sciences and the Astronomical Institute at the Ruhr University Bochum. The LUCI project was sponsored by the Federal Ministry of Education and Research as a collaborative research project.