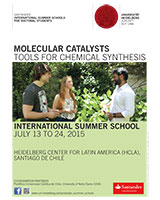 At the invitation of Heidelberg University, a group of outstanding young researchers from Brazil, Chile, France, Germany, Great Britain, Spain and the USA will explore the fundamentals and current scientific developments in the field of molecular catalysis. During exchange and discussion with internationally renowned scientists, the researchers will focus primarily on catalysts as synthetic tools. The 24 doctoral candidates are participants and fellows of the Santander International Summer School entitled “Molecular Catalysts – Tools for Chemical Synthesis”, which Ruperto Carola organises with funding from Santander Universidades in Santiago de Chile. The school will be held from 13 to 24 July 2015 at the Heidelberg Center for Latin America. The Pontifical Catholic University of Chile and the University of Notre Dame (USA) are cooperating partners. The scientific programme includes research as well as tutorial lectures and exercises.

Catalysts are chemical tools which enable or accelerate chemical reactions. They come in different forms, ranging from enzymes in living organisms, which are involved in virtually all cellular transformations, to the activated surface structures in the heterogeneous systems of large chemical reactors. Catalytic steps play a role in over 80% of the industrial production processes. “Molecular catalysis has thus established itself as a key methodology in modern chemical synthesis,” explains Prof. Dr. Lutz Gade, who is professor at Heidelberg University's Institute of Inorganic Chemistry. “In the 21st century, the efficient discovery of catalysts, their design and improvement will make a sustainable contribution, both economically and ecologically, to the optimised use of mankind’s natural environment and resources in view of the growing global energy demand.” Prof. Gade is the scientific coordinator of the summer school in cooperation with Prof. Dr. Alejandro Toro-Labbé of the Pontifical Catholic University of Chile.

A comprehensive programme including lectures, presentations and discussions awaits the doctoral students during the two-week summer school. In addition to scientists from Chile, Germany and the USA, researchers from Brazil, France, Spain and Switzerland will also participate. During the programme, Prof. Dr. A. Stephen K. Hashmi of the Institute of Organic Chemistry of Heidelberg University will deliver a public lecture entitled “Gold – Nugget, Necklace, Nanotechnology“. The researcher will discuss the importance of gold, explaining not only its value as a precious metal, but in particular its use in scientific research and technological applications. The current Santander International Summer School is the third such event to be held at the Heidelberg Center for Latin America (HCLA).

Santander supports the summer school of Heidelberg University through the Santander Universidades Global Division. Within this cooperation, the university receives funding to hold international summer and winter schools with participants from Latin America, Asia and Europe. Four such schools have been held since November 2013, at the HCLA as well as in Heidelberg itself, and in March of this year, at the Kyoto University in Japan. The summer and winter schools are aimed at promoting the mobility of young researchers and expanding new excellence networks in research. The sixth summer school is scheduled for September at Ruperto Carola. It will be devoted to the topic of sustainability in the earth sciences and be held at the International Science Forum in Heidelberg.