From Heat and Cold Comes Image and Mirror Image

Press Release No. 48/2015
16 March 2015
Chemists at Heidelberg University are the first to develop a temperature-controlled catalyst that synthesises both molecular mirror images of a product 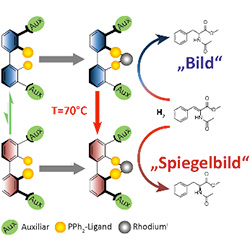 The rhodium catalyst has a three-dimensional structure that renders it stereochemically flexible. During acetamidocinnamic acid hydrogenation, it creates an enantiomer (image) at low temperatures and its mirror image when heated, with high selectivity and full conversion.

Many chemical compounds exist as an image and a mirror image: they differ in their spatial orientation, like the left and right hand. The properties of these so-called chiral molecules are also often quite different – synthesising them cleanly is therefore of critical importance in pharmaceutical development and agricultural chemistry. The working group headed by Prof. Dr. Oliver Trapp at the Institute of Organic Chemistry of Heidelberg University has succeeded for the first time in developing a catalyst that generates both molecular mirror images of a compound solely by controlling the temperature. Their findings were published in the journal “Angewandte Chemie International Edition”.

Whether the essential oil carvone smells like caraway or mint depends on its spatial design, that is, on its chirality or “handedness”. The molecular mirror images, called enantiomers, can have very different properties and effects. L-dopa, for example, is used to treat the dopamine deficiency in Parkinson’s – when combined with an active ingredient that protects against premature conversion, L-dopa is metabolised in the brain into dopamine. On the other hand, its mirror image D-dopa causes a decrease in leukocytes in the blood. Cleanly synthesising the correct enantiomer of the two plays an important role in the manufacture of pharmaceuticals, chemical agricultural products, fine chemicals and fragrances.

To selectively synthesise enantiomerically pure products, enantiomerically pure catalysts, which behave like both the image and its asymmetrical partner, have mostly been used so far. Manufacturing them is expensive and time-intensive. Dr. Trapp’s group has now developed a catalyst that creates both molecular mirror images to a high degree of purity of a product, whereby the selectivity is controlled solely by temperature. Prof. Dr. Trapp, whose “AMPCAT” project (Self-Amplifying Stereodynamic Catalysts in Enantioselective Catalysis) has been funded with an ERC Starting Grant from the EU since 2010, also points out that temperature-controlled selectivity is not only of interest for the synthesis of enantiomerically pure products. It could be a key principle in creating homochiral compounds through a temperature gradient such as observed in RNA polymerisation. Such mechanisms are significant in researching the origin of life.