Santander International Summer School “What is Caesar’s, what is God’s?”

Press Release No. 36/2015
3 March 2015
Santander International Winter School of Heidelberg University explores the concept of religion from a transcultural perspective 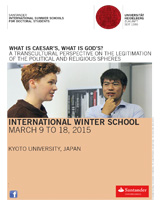 Outstanding young researchers from Asia, Latin America and Europe will gather at Japan’s Kyoto University from 9 to18 March 2015 to attend Heidelberg University’s Santander International Winter School. The 20 PhD candidates from Brazil, Chile, Germany, Greece, Great Britain, India, Italy and Singapore will explore the concept of religion from a transcultural perspective. The gathering will give them an opportunity to exchange views with renowned researchers from a number of universities. The winter school, entitled “What Is Caesar’s, What Is God’s? A Transcultural Perspective on the Legitimation of the Political and Religious Spheres”, is being funded by Santander Universities and co-coordinated by Kyoto University. Members of the Cluster of Excellence “Asia and Europe in a Global Context” at Heidelberg University designed the content.

“The winter school is focussing on the concept of religion. In the 19th century, a new understanding of what is, and is not, a legitimate ‘religion’ changed the terms of the relationship between religions and states throughout the world. Widespread governmental interference in religious institutions ensued. Yet at the same time, new models of social intercourse also arose, such as the constitutionally guaranteed freedom of religion or laicism. The recent events in Paris and Copenhagen clearly show just how problematic navigating these waters is, even to this day,” explains Prof. Dr. Hans Martin Krämer from the Institute for Japanese Studies of Heidelberg University, who developed the concept for this year’s winter school together with Dr. Orion Klautau from the Cluster of Excellence “Asia and Europe” and Prof. Dr. Yutaka Tanigawa from the Institute for Japanese History at Kyoto University. In addition to researchers from Heidelberg, experts from Germany, Australia, Belgium, Brazil, France, Japan, Singapore and the USA will participate in the event. A wide-ranging programme of lectures, presentations and a visit to various religious sites in Kyoto awaits the 20 PhD candidates.

The winter school will open with a public lecture by historian Prof. Dr. Prasenjit Duara of the National University of Singapore entitled “How Relevant is the Concept of Secularism to Asia?”. Prof. Duara will discuss the question of what role the concept of secularism, which had a major influence on history in the West, plays in Asia and especially in China. Against the backdrop of the forthcoming anniversary of the Reformation in 2017, historian Prof. Dr. Hartmut Lehmann of Kiel University will discuss Martin Luther as the theological founder of this church reform movement and its significance in the present. His lecture is entitled “The Quincentennial of the Protestant Reformation in an Age of Secularization and Religious Pluralism”. Winter school workshop topics will include “Religion and Education in Modern Secular Societies”, “Laicism in France” and “Christian Missions in Latin America and Asia”. The eleven-day event will close with presentations by the participants of their research.

Within the cooperation with Banco Santander, Heidelberg University receives funding from Santander Universidades Global Division for holding international summer and winter schools for participants from Latin America, Europe and Asia. These events are held alternatively at the Heidelberg Center for Latin America in Santiago de Chile, the Heidelberg Center of South Asia in New Delhi, India, the International Science Forum Heidelberg, and – now for the first time – at a university in Japan. The summer and winter schools are aimed at promoting the mobility of young researchers and expanding new excellence networks in research. Other summer schools in this series are planned for July and September this year, one on molecular catalysis in chemistry and another on global sustainability in the earth sciences.