Notes to the Publication 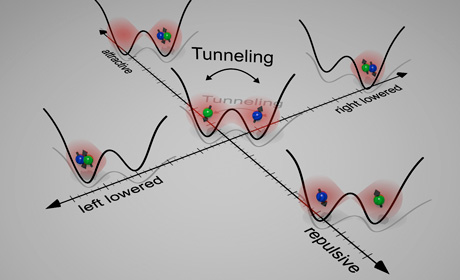 Quantum dynamics of two particles in double well. If the atoms attract each other, they form a pair and tunnel together from well to well. If their interaction is repulsive, they avoid one another, with each being located in its own well. By tilting the wells, both atoms can be localised in the left or the right well.

Understanding the motion of multiple, interacting bodies is one of the central research questions in physics. While it initially concerned the orbits of celestial bodies, this question found its modern equivalent in quantum mechanical many-body systems, such as describing the electrons in a solid. Physicists at Heidelberg University have now succeeded in taking the first step toward explaining these systems in a new way. In an experiment with ultracold lithium atoms, the group led by Prof. Dr. Selim Jochim of the Institute for Physics has created a fundamental building block that in the future will serve as a basis for studying many-body systems. The results were published in the journal “Physical Review Letters” and distinguished as an “Editor’s Suggestion”.

As the Heidelberg scientists point out, they employed a unique method that enables them to generate, in a controlled manner, systems from just a few atoms in a so-called optical trap. In the experiments just published, the physicists added another such trap to the system and allowed the atoms to tunnel back and forth between the two “wells”. In the double-atom experiment, they observed competing effects between the movement of the atoms and their mutual interaction. If the atoms attract each other, they tend to form a pair; but if they interact repulsively, each atom is located in its own well.

The high degree of control over a two-atom system convinces the researchers that they will be able to prepare even larger systems from more wells and atoms in the future. “We have succeeded in creating, as it were, a first Lego brick to which other bricks can be added in future to create a many-body system,” explains Simon Murmann, one of the PhD candidates in the working group. “What’s really extraordinary is the demonstrated adjustability of the tunnelling and interaction of the atoms in the current experiments, which will have considerable implications for the properties of the many-body system,” adds Selim Jochim.

This work is especially interesting because the dynamics of the atoms is comparable to the behaviour of electrons tunnelling from one lattice site to the next in a solid. Thus, the scientists succeeded in describing their system using a model that was originally developed for the conductivity of electronic systems. This approach of reproducing quantum models through experimentally controllable systems is known as “quantum simulation” and is key to solving quantum mechanical many-body problems. The Heidelberg physicists see the greatest challenge in maintaining control over all the atoms in even larger systems to finally perform exact measurements. With these measurements, the researchers hope to contribute to the understanding of effects that have yet to be explained, such as high-temperature superconductivity.