In Search of the Origin of Our Brain 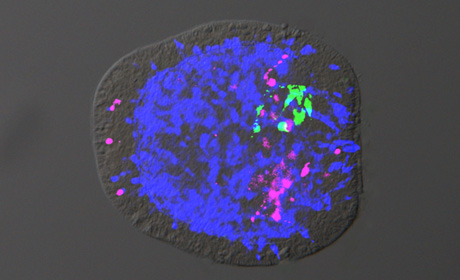 While searching for the origin of our brain, biologists at Heidelberg University have gained new insights into the evolution of the central nervous system (CNS) and its highly developed biological structures. The researchers analysed neurogenesis at the molecular level in the model organism Nematostella vectensis. Using certain genes and signal factors, the team led by Prof. Dr. Thomas Holstein of the Centre for Organismal Studies demonstrated how the origin of nerve cell centralisation can be traced back to the diffuse nerve net of simple and original lower animals like the sea anemone. The results of their research will be published in the journal “Nature Communications”. 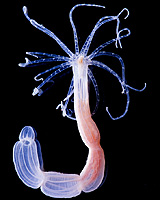 Like corals and jellyfish, the sea anemone – Nematostella vectensis – is a member of the Cnidaria family, which is over 700 million years old. It has a simple sack-like body, with no skeleton and just one body orifice. The nervous system of this original multicellular animal is organised in an elementary nerve net that is already capable of simple behaviour patterns. Researchers previously assumed that this net did not evidence centralisation, that is, no local concentration of nerve cells. In the course of their research, however, the scientists discovered that the nerve net of the embryonic sea anemone is formed by a set of neuronal genes and signal factors that are also found in vertebrates.

According to Prof. Holstein, the origin of the first nerve cells depends on the Wnt signal pathway, named for its signal protein, Wnt. It plays a pivotal role in the orderly evolution of different types of animal cells. The Heidelberg researchers also uncovered an initial indication that another signal path is active in the neurogenesis of sea anemones – the BMP pathway, which is instrumental for the centralisation of nerve cells in vertebrates.

Named after the BMP signal protein, this pathway controls the evolution of various cell types depending on the protein concentration, similar to the Wnt pathway, but in a different direction. The BMP pathway runs at a right angle to the Wnt pathway, thereby creating an asymmetrical pattern of neuronal cell types in the widely diffuse neuronal net of the sea anemone. “This can be considered as the birth of centralisation of the neuronal network on the path to the complex brains of vertebrates,” underscores Prof. Holstein.