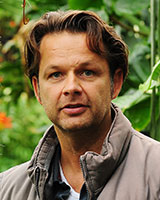 Geochemist Dr. Frank Keppler has been awarded a Heisenberg professorship at Heidelberg University, based at the Institute of Earth Sciences. Involving five years of funding by the German Research Foundation (DFG), this award is a notable honour for highly qualified scientists. The professorship will establish the interdisciplinary research field of biogeochemistry at Heidelberg University. Frank Keppler’s research focus will be the global cycles of trace elements.

„The establishment of the Heisenberg Professorship in biogeochemistry and the work of Frank Keppler will further enhance the analytical competence of geoscientific research in Heidelberg, “ comments the executive director of the Institute of Earth Sciences, Prof. Dr. Jörg Pross. „We will greatly benefit not only in terms of research results – we also hope that this will give a boost to our students, who can become acquainted with state-of-the-art techniques of analysis fairly early in their course. Dr. Keppler‘s analytical approach of studying biogeochemical cycles of trace elements is an important precondition for understanding modern-day anthropogenic environmental and climatic change, which is also a focus of Earth Sciences in Heidelberg.“

Prof. Keppler explains that the research field of biogeochemistry combines the disciplines biology, geology and chemistry and deals with the interaction between atmosphere, biosphere, hydrosphere and geosphere, as well as with the „anthroposphere“, the habitat created by humankind. Frank Keppler wants to use the interdisciplinary approach of his research field for cooperation with other scientists: “There are many transdisciplinary interfaces between our Institute and others.” He intends to focus his teaching on what is known as the Anthropocene. „My aim is to get the students to engage with the fact that we live in an age in which humankind is changing and reshaping the earth’s surface on a grand scale.“

Frank Keppler (born in 1967) studied geology in Heidelberg and received his doctorate in mineralogy at Heidelberg University in 2000. After spending time at Queen’s University in Belfast (Northern Ireland) and the Max Planck Institute for Nuclear Physics in Heidelberg he headed a working group at the Max Planck Institute for Chemistry in Mainz from 2006 to the beginning of 2014, before moving to Heidelberg University to become research group leader. His research interests include the study of trace gases, which play an important role in Earth’s climate and atmospheric chemistry, and measurement methods in the field of renewable energies. Another area of investigation is palaeoclimate research, which helps to reconstruct the history of Earth’s climate, e.g. through the study of tree rings and sediment cores. Frank Keppler has already received several awards, including the European Young Investigator Award of the European Science Foundation and the Marie Curie Excellence Award of the European Commission.

Frank Keppler already spent from January to October 2014 doing research at Heidelberg University on a Heisenberg scholarship. Professorships and scholarships are part of the Heisenberg Programme with which the DFG supports outstanding young scientist to prepare for a leading scientific position. The Heisenberg professorship is one of the best endowed third-party funding instruments for post-doctoral research in Germany.