University of Gießen
Institute of Physics I

On the Trail of Proteins 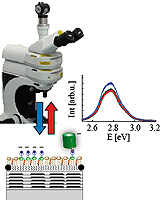 Scientists from Heidelberg University in collaboration with researchers from the University of Gießen have succeeded in electrochemically detecting protein binding on semiconductor materials for the first time, thanks to a newly developed investigative method based on differences in electrical charge. Now the physicists are working on an optical process to detect and localise protein binding directly under a microscope, for example, a method that could launch new applications in medical research and diagnostics.

The basis for the electrochemical detection of protein binding are laboratory-produced biological membranes that consist of so-called supported lipid monolayers – two-dimensional molecular structures that are essential building blocks of cellular membranes. The researchers deposited these membranes onto nanostructures of the semiconductor gallium nitride (GaN), known for its chemical and electrochemical stability as well as its unique optoelectronic properties. The scientists were then able to detect protein binding on the hybrid biomembrane-GaN structure for the first time using an electrochemical charge sensor. The sensor measures the charge differences that result when proteins bind to the so-called lipid anchors of the membrane. The development of the hybrid biomembrane-GaN structure is based on the work of Nataliya Frenkel, a PhD student in the Physical Chemistry of Biosystems research group led by Prof. Dr. Motomu Tanaka at Heidelberg University's Institute for Physical Chemistry. For the sensor application, the Heidelberg researchers joined forces with semiconductor physicists from the University of Gießen under the direction of Prof. Dr. Martin Eickhoff.

Their findings, published in the journal “Advanced Functional Materials”, lay the basis for developing new processes that can also produce optical evidence of protein binding. The biological membranes will be deposited onto GaN-based quantum dots – structures the size of just a few nanometres. The quantum dots will then be excited with light to emit radiation. Proteins binding to the membrane change the intensity of the emission. The researchers have already demonstrated this principle to be suitable for optical detection of protein binding. They are collaborating on the implementation with the CEA, France’s Commissariat à l’énergie atomique et aux énergies alternatives.

To intensify research in optical detection, Prof. Tanaka has initiated the formation of an international interdisciplinary association under the auspices of the German-Japanese University Consortium HeKKSaGOn. In addition to scientists from Heidelberg, the association includes working groups from the universities of Kyoto, Gießen and Barcelona as well as partners from the CEA. The University of Kyoto has provided the research cooperation with initial funding within its SPIRITS programme for two years.