Simply Complex – The Origin of Our Body Axes 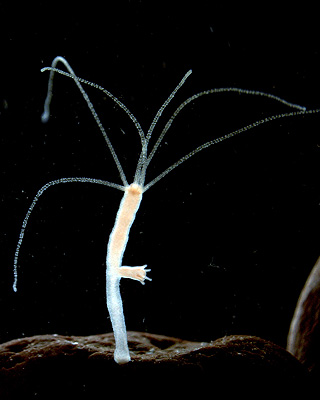 Experimental biology owes much to the discovery of the freshwater polyp Hydra over 300 years ago. Hydra was first described by Antoni van Leeuwenhoek in 1702. In 1744 Abraham Trembley published a remarkable series of experiments on Hydra, the first to demonstrate regeneration, tissue transplantation and asexual reproduction in an animal. The photograph shows a budding Hydra magnipapillata polyp.

The fresh-water polyp Hydra, a member of the over 600-million-year-old phylum Cnidaria, is famous for its virtually unlimited regenerative capability and hence a perfect model for molecular stem cell and regeneration research. This polyp, with its simple structure and radial symmetry, can help us understand how our body axes came to evolve. Scientists from Heidelberg and Vienna have brought this evidence to light through their research on the formation of new polyps in the Hydra through asexual reproduction. Their findings have now been published in the journal “Nature”. Project participants include a working group under the direction of Prof. Dr. Thomas Holstein and Asst. Prof. Dr. Suat Özbek at the Centre for Organismal Studies (COS) of Heidelberg University and Dr. Heiko Schmidt at the CIBIV (Center for Integrative Bioinformatics Vienna) at Max F. Perutz Laboratories (MFPL) of the University of Vienna and the Medical University of Vienna. The Hydra reproduces asexually by producing buds on the body wall of the adult, which then mature to form new polyps. The Heidelberg researchers delved into this process at the molecular level and discovered that a signal pathway is used that triggers the left-right asymmetry of organs in higher animals, including humans. The processes that play out at the molecular level are strikingly similar to those that trigger the formation of body axes in early embryos of vertebrates.

One fundamental question in biology is what constitutes the basic type of the animal body plan and how did all the more complex forms, including that of humans, evolve from it. At the simplest level, this body plan can be described by the three axes as defined in the Cartesian coordinate system. These three axes – the familiar X, Y and Z axes from geometry – are the anterior-posterior (AP) axis, which determines the position of the mouth in front and the anus at the rear, the dorsal-ventral (DV) axis, which in vertebrates separates the front of the body from the back, and the left-right (LR) axis, which creates a mirror-like symmetry of our extremities and left-right asymmetry of the organs.

These three body axes are defined early on in embryonic development. A fertilized egg cell begins to divide, initially producing a ball-shaped “heap” of undifferentiated cells. It is in this early stage of the embryo that the position of the first opening of the body is determined, which simultaneously defines the AP axis. “This process can be explained geometrically as a symmetry break, and other symmetry breaks follow that define the other two axes, the DV and LR axes,” explains Prof. Holstein from the Centre for Organismal Studies (COS). The genetic basis for each of these body axes had already been identified in the embryonic development of humans, other vertebrates, and even in insects and worms. Evolutionarily highly-conserved molecular signal systems act as molecular vectors to define each of the body axes and control the formation of different cell types. Many of these so-called developmental genes also play a major role in the development of cancer.

In their molecular analyses of the stem cells and Wnt proteins of the freshwater polyp Hydra, which has only one clearly defined body axis with one opening, the researchers identified what is known as Nodal signalling in this primitive system. “Until now we knew of this signal path only in bilaterally symmetric animals, where it is involved in establishing a signal centre for early embryonic development and left-right asymmetry. Using various pharmacological and genetic experiments, our group was able to demonstrate that the Hydra also has a Nodal-type gene, which together with the main target genes of the activated Nodal signal path, is involved in the asymmetrical positioning of the Hydra buds,” explains Dr. Hiroshi Watanabe, a member of Prof. Holstein’s group. In the Hydra, the buds break away from the adult; in coral, another member of the Cnidaria family, the buds remain attached to the adult and form colonies with complex branches. The Nodal signal pathway is activated by components of the “primary” signal pathway that is responsible for the anterior-posterior axis (Wnt signal pathway). The Nodal pathway controls the development of the left-right body axis in bilaterally symmetric animals (e.g., vertebrates).

The Heidelberg study presents the first evidence of the existence and participation of the Nodal signal pathway in axis induction in a “radially” symmetric organism. “We assume that this was a starting point in the evolution of left-right axis formation in the bilaterally symmetric animals. Identifying just how this complex bilaterian body plan evolved opens up other exciting areas of research,” explains Prof. Holstein. These findings, however, already point to how similar the core molecular-level embryonic processes are between the simple Cnidaria and the vertebrates, including human beings.